The Funguar is an enemy in Final Fantasy X, encountered on the Mushroom Rock Road. Its main attack is Fire, and when targeted, it has a 33% chance of countering with Pollen, inflicting Sleep to the entire party. Its Fire spell does not wake characters up. Facing three of these fiends can be a daunting challenge if the party has no protection from Sleep attacks. It is weak to the fire element itself, and halves damage from the other elements. 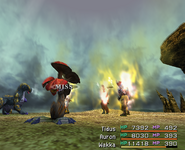 Retrieved from "https://finalfantasy.fandom.com/wiki/Funguar_(Final_Fantasy_X)?oldid=3363662"
Community content is available under CC-BY-SA unless otherwise noted.