Five-pointed ninja throwing star. Use with the Throw command.

Fuma Shuriken (also known as Ninja Shuriken or Hellwind Shuriken) is a throwing weapon for Edge, that deals heavy damage. It can be bought at Kokkol's Forge and the Lunar Ruins for 50,000 gil a piece and found in the Sealed Cave. This weapon is metallic.

In the Easy Type version, its attack power was increased to 100.

The Fuma Shuriken is a throwing weapon that can be thrown by Edge and it can be found inside the Sealed Cave. It has an attack power of 100 and a accuracy of 99.

The Fuma Shuriken can be bought from Tradingway outside of the Lunar Whale and in Crystal Depths B1 for 50,000 gil. They have an Attack power of 80 and can be thrown by Edge through the Throw command and Gekkou through the Shuriken command.

Fuma Shuriken (also called Pinwheel or MagiShuriken) can be thrown by Ninjas. It can be bought in the Phantom Village for 25,000 gil and found in Castle Exdeath's twelfth floor.

Fuma Shuriken (also called Ninja Stars) can be thrown by Shadow. They have an attack power of 132. They can be bought in Thamasa in the World of Ruin for 500 gil each, or dropped from Ninjas.

The Magic Shuriken (mistranslated from Fuma Shuriken) is a powerful weapon for Yuffie. It has 64 Attack, 113 Hit Rate, Dexterity +10, and three single Materia slots. It can be bought for 8,000 gil in Junon (Part 2/3), and found in Wutai Village in Godo's house.

Fuma Shuriken is throwable by Ninjas. They can be crafted, bought, or dropped by the Sozu Sarberry enemy.

A long ranged Ninjutsu attack for Ninja performed by executing any one mudra in isolation.

Fuma Shurikens (Magic Shuriken in the PS version) can be thrown by Ninjas after they learn to throw Shuriken for 50 JP. They can be poached from Ahriman (common).

Fuma Shuriken has an attack power of 15 and can inflict Poison and Paralysis upon attacking. It can be bought for 28,000 gil on the 40F of the Mysterious Lighthouse.

The Ninja Star is Tristam's weapon of choice. It is a shoot-elemental weapon that can inflict Poison and Paralyze. It has limited ammo, and is thrown as Tristam's normal attack.

While not formally appearing, the Fuma Shuriken appears as part of the artwork for Edge.

The Fuma Shuriken is a level 85 throwing weapon that grants +59 Attack and -36 Bravery. It also grants EX Mode Absorption +20%.

The Fuma Shuriken is an item that is used during Battle Music Sequences. It activates when an enemy is below 50% HP and deals a low amount of damage. It is obtained randomly after competing a Music Stage.

Fuma Shurinken is an item that can be used in Battle Music Sequences. It activated when monster's HP falls below 50% and deals low damage. It is randomly obtained after completing a Music Stage.

A ninja throwing weapon. More damaging than a standard-issue shuriken, it is a rare sight at the weaponsmith. Hard to come by even for accomplished ninjas, those who are fortunate to obtain one are known to save it for the most formidable foes. Its distinctive shape and flight path makes aiming a challenge

The Fuma Shuriken appears in both the Bakumatsu and Final chapters. They are consumable attack weapons that deal random damage. 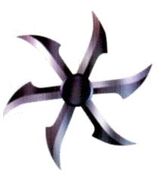 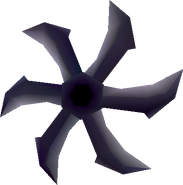 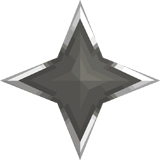 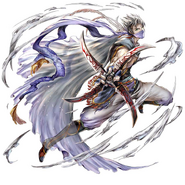 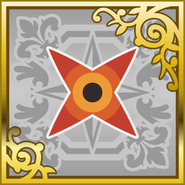 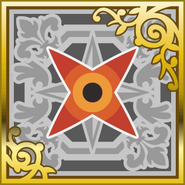 [view · edit · purge]The surname of Fūma is associated with the Fūma Clan of ninja. Fūma translates as "wind demon". Though having served since the Nanbokucho period, their exploits were most famous during the times of Sengoku under the employ of Toyotomi Hideyoshi. The clan was renowned for its focus on controlled chaos and acts of sabotage, from psychologically goading opposing forces into attacking each other, to hiring pirates, thieves, brigands, and thugs for diversions involving raids on villages on enemy territory. While they formally went by the surname of Kazama, it is popularly believed they went with Fūma to befit their reputations as "demons of the wind", not unlike Fujin and Raijin, the demon gods of storms who were said to have reigned terror on men before their subduing into penance. Fūma Kotarō is the most famous of their clan, and is a title for every successor for the head of their ranks.

[view · edit · purge]A shuriken is a traditional Japanese concealed weapon that was generally used for throwing, and sometimes stabbing or slashing.