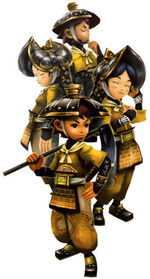 The Fum Caravan is a group of Crystal Caravanners that consists of four Clavats from the Fields of Fum in Final Fantasy Crystal Chronicles. When met, they sometimes comment about how plants are not affected by the Miasma and at other times they offer the player food.

When the player first meets the Caravan from Fum, they all introduce themselves and tell him/her about their life in the Fields of Fum. The second time s/he meets them, they will invite him/her to have a quick snack with them and s/he will receive the snack as leftovers.