Cid Pollendina: Oh, shut up and help me remodel the Fulan Pass page!
Please expand this article into a full one. The following tasks need to be completed:This request can be discussed on the associated discussion page. Remove this notice upon completion.

Fulan Pass is a location in Final Fantasy Brave Exvius. It is a road connecting Port City Lodin and Royal Capital Grandshelt, capital of the Kingdom of Grandshelt, the sovereign nation of Grandshelt Isles.

According to Sophia, knights patrol the area often, so the monsters here are few.

Some 20 year ago, the nurse Sophia brought the knight Raegen to Fulan Pass during their tour around Grandshelt. After they married, they established their family home in the area, and raised their children Rain and Lasswell. However, after Sophia's death and Raegen's disappearance, Rain and Lasswell left for Royal Capital Grandshelt where they became knights, not returning to house for years.

Following the attack on Grandshelt Castle by Veritas of the Dark, Rain and Lasswell make their way through Fulan Pass to reach Port City Lodin, all the while followed by the mysterious Fina.

After Rain's disappearance at the end of Season One, Lasswell returns to Grandshelt, hoping that Rain has returned to their homeland on his own and to find the determination to wield Crimson Saber. An admiring trio of soldiers asks to train with him. As castle grounds are off-limits, they head to Fulan Pass where Lasswell defeats them in a sparring match. Lawrence and Charlotte go to Lasswell's encounter, but Charlotte notices Lasswell's uncertainty and challenges him to a fight.

After the fight Lawrence and Charlotte accompany Lasswell to his home while he tells them of Rain's circumstances. Once they reach the house, Lasswell enters alone and notices that his father has left Sophia's favorite flower recently. He swears to Sophia's memory that he will find Rain and and that he will come back soon.

Use a limit burst

Deal ice damage to an enemy 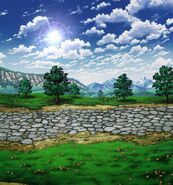