Fujin is a character from Final Fantasy VIII, and a member of Balamb Garden's disciplinary committee alongside Raijin and Seifer Almasy. Her most distinguishable trait is her manner of speech.

Fujin has short, chopped, silver hair and red eyes. Her left eye is covered by an eye patch. She wears an all-blue getup with a metal pauldron over her left shoulder (mirroring the one worn by Raijin).

In Kingdom Hearts II, Fujin wears a blue high-neck sleeveless vest with a zipper, a pale yellow cropped cargo pants and purple sneakers. The fringe of her hair covers her left eye.

Stoic and disciplined, Fujin is the most stringent to the disciplinary committee rules compared to her two partners, who either forget them (Raijin) or outright disobey and/or rebel against them (Seifer). When acting under authority of the committee, it is usually Fujin who cites the rules being broken, allowing her comrades to then pursue the students violating them.

Fujin is devoted to her two friends and will go out of her way to help and/or support them, even if, at times, their respective behaviors frustrate her.

Preferring efficiency, Fujin dislikes "small talk" and will cut her sentences down to the bare minimum needed to get a point across, resulting in various one-word statements or exclamations. Fujin speaks in one-word sentences, usually shown in all-capitals in the text boxes (e.g. "RAGE!" or "LIAR!"), though later she is seen to speak more prominently. In the Japanese release, she speaks in kanji characters. The French version never has Fujin speak in single-word sentences. Rather, the majority of her dialogue consists of her telling Raijin what to say next. Although the capitalised speech is absent in Kingdom Hearts II, Fujin's one-word sentences are rendered in all caps in the subtitles for Dissidia Final Fantasy Opera Omnia.

POSSE... We are. We always will be. Because we're a posse, we want to help you. Whatever it takes to fulfill your dream, we're willing to do. But... You're being manipulated, Seifer. You've lost yourself and your dream. You're just eating out of someone's hand. We want the old you back! Since we can't get through to you, all we have now to rely on is Squall! It's sad... Sad that we only have Squall to rely on... Seifer! Are you still gonna keep goin'?

Fujin to Seifer, the only time in the game she speaks in full sentences.

Fujin is enrolled at Balamb Garden and she, Raijin, and Seifer form the disciplinary committee. Rarely seen apart, the three bully their fellow students through punishment and detention. When Seifer breaks out of the disciplinary room and goes rogue, Fujin and Raijin embark to find him despite the Garden already sending Quistis. Headmaster Cid instructs Fujin and Raijin to deliver new orders for Squall's party to Galbadia Garden's Master Martine.

At Galbadia Garden they do as they were asked and run across Squall, who informs the two Seifer has been executed for actions against Vinzer Deling, the president of Galbadia. The two don't believe Seifer would go down so easily. When Squall's party returns to Balamb Garden under the threat from Galbadian missiles, they run into Fujin and Raijin who promise to assist Squall in evacuating the students, and are not seen again in the Garden afterward.

It is unknown when Fujin and Raijin reunite with Seifer, but as he has become Sorceress Edea's knight, Fujin and Raijin become generals of the Galbadian army to support him. Assisting in the search for Ellone the two encounter Squall again in Balamb during a Galbadian-induced lock-down. Squall defeats them, but lets them leave peacefully after Fujin and Raijin explain their reasons for continuing to follow Seifer: because Seifer has no other friends, and everyone at Galbadia is only taking orders from him because they fear the sorceress he serves.

During the Battle of the Gardens Fujin and Raijin run into Squall's party in the Galbadia Garden, but decide not to fight. Sorceress Edea is defeated and Fujin and Raijin assist Seifer as he resurrects the Lunatic Pandora. The two begin to admit Seifer is no longer the friend they once knew and, when Squall arrives in Lunatic Pandora to rescue Ellone, they allow him to confront Seifer. Fujin makes an emotional plea for Seifer to stop what he is doing, but Seifer claims it is too late to go back, and wishes them a good life, before he fights Squall one last time.

After Squall and his party go into the future to defeat Ultimecia, Fujin and Raijin go fishing together with Seifer, who has returned to being the friend they remember. After Raijin shows off a fish he has caught, Fujin kicks him off the pier into the sea, much to Seifer's amusement.

Fujin is fought twice: First in Balamb and second in the Lunatic Pandora. Both times she uses a chakram-type weapon and wind magic. The Guardian Force Pandemona can be drawn from her.

Fujin shares her Triple Triad card with Raijin. Theirs is a Level 6 Boss Card with good values for playing the minigame that can also be turned into an X-Potion with Quezacotl's Card Mod. The card can be rarely Carded from Iron Giant or Jelleye and won from NPC card players who use Level 6 cards.

Fujin, along with Raijin, was initially designed to appear in Final Fantasy VII, but the inclusion of the Turks saw their presence unnecessary and they were shelved until Final Fantasy VIII.[2]

Fujin has appeared in the following games throughout the Final Fantasy series:

Fujin has made guest appearances in the following non-Final Fantasy games:

Artwork of the "disciplinary committee".

Fujin and Raijin greet Squall's party onboard the Lunatic Pandora.

Fujin watches Raijin in the water. 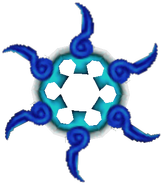 [view · edit · purge]Fūjin is the Japanese wind god. In Chinese Buddhism, a legend states that Fūjin and Raijin were originally evil demons who opposed Buddha. They were captured in battle with Buddha's army of heaven, and have worked as gods since then. This explains her use of wind-based attacks, and why any wind-based attacks or magic will heal her. The player can also draw the game's wind-type Guardian Force, Pandemona, from her.