Guest character
Fuji, also known as Heroine in the Japanese version, is the main female protagonist and a temporary party member in Final Fantasy Adventure. The player can name her, but she is called Fuji in the English game manual. She accompanies Sumo on four separate occasions and is the last descendant of the Mana Family who created the Tree of Mana that gives life to the world.

Fuji has long hair blonde hair with a single braid and a long white dress and Sandals in the final adventure. In the 3d remake, her hair has flowers. Her white dress has a pink and blue sash and wears sandals.

Fuji possesses a kind and caring personality. She deeply cares for others like Sumo and her mother. She deeply show feelings for Sumo and is kind to everyone in the world.

Fuji is being escorted to Wendel to be protected from Dark Lord, who is seeking her and her Pendant of Mana to gain access to the Tree of Mana. They are attacked by monsters outside of Topple, and her escort, Hasim, is fatally wounded. In his last words Hasim tells Sumo to take Fuji to Wendel and find the old Gemma Knight Bogard. Sumo tells Fuji that he's also looking for Bogard, and suggests they travel together. Bogard lives as a hermit in the mountains, recognizes Fuji's pendant, and tells them to find Cibba in Wendel.

On their way to Wendel, the two stop for the night in Kett. Fuji gives Sumo her Magic Book of Cure before they fall asleep, but is captured by the house's master, the vampire Mr. Lee. In the Japanese version, Mr. Lee kidnapped Fuji because he wanted a virgin's blood.

Once Sumo rescues Fuji, they continue to Wendel. They meet Cibba, who summons the spirit of Fuji's Mother, who tells her she is of the Mana Family, who created the tree and whom the Gemma Knights protect. Fuji is captured by a disguised Julius as his army attacks Wendel. Sumo boards Glaive's Airship, and when he can't free her from the inside, he tries to break her out from the outside. Julius catches them, and Sumo is only able to get the pendant before he is knocked off the airship. As the ship takes Fuji to Glaive Castle, Amanda steals the pendant from Sumo and gives it to Davias in Jadd to try and buy her brother's freedom. Davias gives the pendant to Julius' bird Garuda to take to Glaive Castle.

Once Sumo makes it back to Glaive Castle, he finds Fuji there. As he confronts Dark Lord, he recovers a fake pendant. Julius, who has the real pendant, bewitches Fuji into chanting the spell to let them ride up the waterfall to the entrance of the Temple of Mana.

By the time Sumo reaches the temple, Julius has gained the power of Mana. His defeat at the hands of Sumo destroys the Tree of Mana. The spirit of Fuji's Mother tells her she must now become the new and last tree, leaving Sumo with the lifelong task of guarding the tree as the last of the Gemma Knights.

Fuji possesses no fighting prowess, and she won't attack enemies. However, she will, when asked, slowly regenerate Sumo's HP through magic. 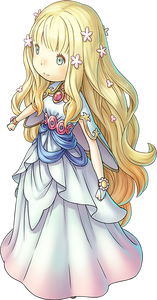 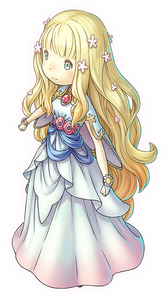 Heroine of Mana.
Add a photo to this gallery

Artwork from the mobile remake.
Add a photo to this gallery