If it means I can save this planet, I'll do anything. Even if it means giving up my... life.

Fuhito is the primary antagonist in Before Crisis -Final Fantasy VII-. He is the intellectual force behind AVALANCHE, and excels in creating battle plans. Highly knowledgeable in not just matters of science, but also in terms of tactical warfare, he is helpful with conceiving tactical solutions and providing support from a strategic vantage. Fuhito fights with a modified gun that shoots out a high-powered blast of energy.

Fuhito has swept back spiky brown hair and wears glasses and an earring. He dresses in nondescript beige attire. After his transformation his hair grows longer and wilder and his arms grow into colossal scythes.

Fuhito is exceedingly polite and calm to both his allies and enemies. At the same time, he is treacherous and cold to those around him, viewing them as tools and not as equals. His hero is the mad scientist Professor Hojo, as the both share a similarly deranged view of science. He has no patience with Shears.

Fuhito's plans take preservation of nature to the extreme. He believes that all people should be returned to the Planet in order to stop the harming of the Planet and let it heal. To achieve his end of genocide, he is willing to do anything and everything. To this end, he uses Elfe in a plot to summon a creature called "Zirconiade". His coldness towards Elfe's deteriorating condition causes Shears to leave AVALANCHE.

Fuhito captures a disc containing data on SOLDIER, captured with the help of his personal attack squad of semi-human monsters called the Ravens. Fuhito orchestrates an AVALANCHE attack on Shinra Building just so that he can meet Professor Hojo and show off his scientific genius.

Once gaining the Zirconiade Materia, Fuhito activates it and his body mutates, becoming one with the powers of Zirconiade. Due to this and the immense powers radiating from the Materia, Fuhito, with the infinite knowledge held within it, loses most of his sanity, but is able to keep only some of it when he battles the Turks. After his defeat, Zirconiade would be fully released, and Fuhito is killed. His plans fail once the Turks destroy Zirconiade.

Fuhito would leave behind plans to bomb Mako Reactor 1, which are later performed by Barret Wallace and his second AVALANCHE at the start of Final Fantasy VII. 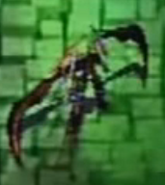 [view · edit · purge]Fuhito can be interpreted as meaning "non-human" in Japanese.