Jessi Keenan (War Of The Visions)

An elven warrioress who claims to be the daughter of a merchant from a distant land. Fryevia is on a journey to find equipment suitable for her abilities, as she is much more skilled with the sword than the average soldier. She usually disguises herself as a human and enjoys interacting with others. Always exuding an air of purity and elegance, it may be surprising to learn that she believes money to be no object in order to obtain what she desires.

Fryevia is an optional playable character from Final Fantasy Brave Exvius. She is an elven Spellblade who travels the world to hone her skills, while engaging on egg hunting when the season comes up, usually to perform her own businesses although she has little care for money.

Original to the game's Global version, she debuted on the event The Egg Seekers along with Xon and Aiden.

Fryevia is an elven girl with signature pointy ears. She has short silver hair and an accessory on her hair. She wears rather formal clothing consisting of a white suit with some segments being coloured sky blue with golden borders. The suit is coloured blue underneath and sports a skirt section and a longer back section at leg-length. She also wears a pair of celestine boots and her signature Fryevia's Needle, which befittingly, is shaped like a needle although it has a noticeable winged adornment on the handle.

Fryevia is often portrayed as a stoic, composed and dignified individual and acts with proper mannerisms. Although she may look distant and serious, she can lend a helping hand, provided they can ask her properly as she scolded Aiden for demanding her help, although understanding that the young man was agitated in trying to reach his objectives. Although it is hinted that she is in fact quite wealthy, she holds money with little regard and mostly follows the path of the warrior, being taught by her grandfather.

Fryevia currently has two variants: one simply-called "Fryevia", while the others is called "Aurora Fryevia". Both are 5-7★ units and focus on dealing hybrid damage (i.e. damage that is both physical and magical in nature), though they differ in that the original focuses on Ice-elemental damage, whereas Aurora Fryevia specializes in Light attacks. Regarding weapons, she can only equip swords, but her armor selection is more varied: hats, helms, clothes, light armor, heavy armor, robes and accessories.

Aurora Fryevia was released for the Fan Festa 2018 celebrations, and was distributed to all attendees along with her prism (she was later made available for summoning in March 2019). 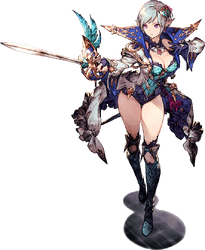 Fryevia appears as a summonable vision and optional playable character. She retains her original appearance. She serves as a character representative from Final Fantasy: Brave Exvius. She is currently a global-exclusive unit.