The Frostbeast, also known as the IceBeast or Cold Beast, is an enemy in Final Fantasy IV.
See also: Frostbeast

Frostbeasts can be a threat, especially when they appear in groups of two or three. They have access to the devastating Icestorm ability, which can cripple the party. Advanced spells such as Firaga and Flame weapons should be used to defeat these enemies with ease.

Frostbeast appears as an enemy. 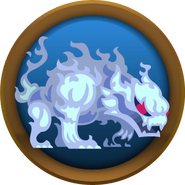 Retrieved from "https://finalfantasy.fandom.com/wiki/Frostbeast_(Final_Fantasy_IV_2D)?oldid=3300328"
Community content is available under CC-BY-SA unless otherwise noted.