All Qus love frogs best. Eating frogs is key to growth. Qu marshes exist all over world. Go eat frogs in other marshes. I promise, you get much learning.

Frog catching is a minigame in Final Fantasy IX. The player must have Quina in the party to play at any Qu's Marsh. Catching frogs powers up Quina's Blue Magic spell Frog Drop and can yield many rewards, as well as an achievement/trophy in the latest versions of Final Fantasy IX.

When the player catches 99 frogs, Quale will appear to praise Quina, saying that they have nothing else to teach and that Quina is now on their own. Quale challenges the party for a boss battle as a final test, and the reward for winning is Quina's ultimate weapon, the Gastro Fork.

Quina can run around the marsh and pressing

near a frog captures it, showing its type. The player can then either keep the frog or release it. Quina cannot enter water and must catch the frogs when they are on dry or approach the dry.

The frogs jump away from Quina towards the water when they get too close. The player can pay attention to their jumping patterns and run to them while they're jumping outside the water. 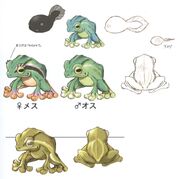 Leaving a male and a female frog at each marsh ensures that the population will regenerate quickly, and leaving a golden frog will further boost the rate the frogs will spawn. There can be only one golden frog in-game at one time, counting all four marshes. Catching the golden frog in the latest versions of Final Fantasy IX yields the achievement/trophy Going for the Gold.

Frogs display sexual dimorphism in a number of ways. Female frogs have a black stripe running the length of their bodies, which males lack. Females also have red feet while males have yellow. Females are a slightly lighter shade of green (although this can be hard to distinguish). Baby frogs are genderless, but will count as 1 frog when caught. Tadpoles cannot be caught. Mating is chance-based and occur between a male and female pair of frogs; there is no polygamy. The golden frog is not sexually ambiguous.

Frog growth is time-based. Each marsh handles the passage of time differently, and has its own rate of growth and regeneration. There are limits to how little or how much time is necessary to affect the pond's inhabitants. The game decides what will happen in the pond the moment the player enters a marsh, and frequent visits can be detrimental. Frogs will disappear from the pond if single-gender groups are left behind on a marsh.

Only time spent outside the marshes matters. The ponds have a preset mix of frogs before the player's first visit that is almost guaranteed to change when the player arrives due to the passage of time, since all ponds begin with 00:00:00 as their "time of last exit".

Frog maturity is determined by a level system. Each adult frog, baby frog and tadpole gains a level for every Marsh Time period that has passed since the last visit. Current level dictates the current stage of maturity. The level cap is 15, but a frog can begin mating when it has reached level 10.[1]

If a marsh is cleared empty, a LV1 female and LV1 male will spawn on the next visit.

Whether a pair of frogs will reproduce is chance-based. Each pond has eight frog slots and at level up, an adult male and an adult female will mate as many times as there are available slots until either a tadpole is born to fill a slot, or mating fails at every slot. If there are several levels to gain at one time, the mating process will occur before each level up is given. There is a 50% chance a tadpole will be born per available slot. Only couples of frogs will mate; there is no polygamy. The random number generator allows the player to play the odds via resets. Saving the game outside a marsh, one can reset and try again to spawn more frogs. If single-gender groups of adults, babies, or tadpoles are left behind on a pond they will simply disappear.[1]

There is a bug wherein any frog occupying the eighth slot will not count when the game determines the number of males and females left, meaning one is at risk of returning to an empty pond after leaving a male and a female behind. It is impossible to determine which frog is in which slot, so the player cannot anticipate the glitch.[1]

The golden frog participates in the mating process, and thus is at risk of disappearing or falling victim to the eighth-slot bug. If a golden frog is eliminated via one of these ways, the next tadpole born to its slot will be the new golden frog and give the same bonuses.[1]

A golden frog born on the first visit to the Mist Continent marsh will not take the appearance of a golden frog until after the party meets Quale, but its effect is immediate. Whichever frog Zidane catches for Quina upon their first meeting will not be removed from the pond data.

Frog is the weakest card in Tetra Master and will be a pain to level up if the player is after the ultimate card rank. The best way to upgrade Frog's attack is have it battle another Frog, or something with 0 physical attack. Once it upgrades to X, it can battle something with 0 physical or magic defense. The player can also play them against Fat Chocobo and let the opponent challenge the Frog with chocobo cards.

It can be won from the dwarves in Conde Petie, the mages at Black Mage Village, Mario from the Treno card tournament if the player told Vivi Ornitier to not leave town during an ATE, from some people in Daguerreo, the "Sky Chocobo" in Chocobo's Paradise, as well as the Rare Phantom in the Time Warp area of the final dungeon.

In Final Fantasy XV Episode Duscae the player can find Cherished Frogs, which cannot be sold. Their description reads, "Frog from fond childhood memories. Never caught more than nine." This refers to Quina's frog catching minigame with the "nine" referring to Final Fantasy IX itself.