Inflicts one enemy with toad status.

Frog Song (カエルのうた, Kaeru no Uta?), also known as Pond's Chorus, FrogSong, Song of Toad, Song of the Toad, and Toadsong, is a Blue Magic spell and a Bardsong that inflicts the target with the Toad status effect.

In the 3D remake versions, Edward can learn Toadsong at level 20 as a Bardsong. It can also be used through the Sing Augment ability as long as the character has it equipped and is at the necessary level. In the 2D versions, this ability can only be used by using the Bardsong command while Edward is a Toad.

Edward can inflict Toad on opponents by his Toadsong song, performed from his Bardsong command when he is himself a Toad.

Pond's Chorus (originally called Toad Song) is a Blue Magic spell that turns the opponent into a toad at the cost of 5 MP. It can be learned from Azulmagia, Elf Toad, Archeotoad, Kornago, Farfarello, Gilgamesh, Lemure. It can also be learned from Vilia if the player controls the enemy with a Beastmaster. In order to learn it at its absolute earliest, from the Elf Toad, the enemy must be alone in order for it to even use the spell.

It can also be used by catching and releasing an Elf Toad, Archeotoad, or Kornago.

Frog Song is an Enemy Skill learned from the enemies Touch Me, Toxic Frog, and Christopher. In addition to turning/curing one target into/of a Frog, it also puts it to Sleep for a cost of 5 MP.

Frog Song is a enemy ability that Charms the target and transforms them into a frog. It is used by the Poroggo.

Frog Song is an enemy ability used by Gilgamesh. It inflicts Toad status on a player, preventing them from using actions. Gilgamesh can be heard to sing when the ability is used.

Animists can learn Frogsong, which inflicts Frog. The ability is learned for 200 AP through the Aona Flute, and costs 18 MP to use.

Lamias can use Poison Frog which inflicts Poison as well as Frog.

Animists and Lamias retain their Toad-status moves, though the former's move is known as Toad Song. It can be learned from the Blueleaf Flute for 400 AP and costs 22 MP to use. 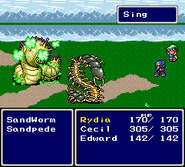 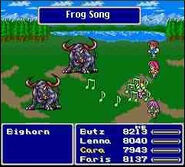