Final Fantasy Wiki
Register
Don't have an account?
Sign In
Advertisement
in: Characters in Final Fantasy Tactics A2: Grimoire of the Rift, Paladins, Secret characters, Hume in Ivalice
English

...However others see me, pariah or paragon, I am but myself.

Frimelda Lotice is a character in Final Fantasy Tactics A2: Grimoire of the Rift. The party first meets her as an oddity—a Zombie Paladin. In subsequent missions, the party learns about her past and agrees to help her.

Frimelda is a young woman with short auburn hair and teal eyes. She wears a green surcoat and red waist belt over a white high-necked shirt and black pants. She wears bronze armguards and gauntlets and knee-high brown boots with red ties.

As a zombie, she appears brown and wears a green shirt and gray pants.

Frimelda is a magnanimous young woman whose work ethic and talent let her become a master swordswoman. Though being betrayed and turned into what others consider a monster, she doesn't grow vindictive or vengeful, living up to her role as a Paladin.

Frimelda was a blademaster (剣聖, kensei?) who wielded her blade, the Fallen Angel, with grace and skill, making her a legend throughout Jylland. She traveled with a man named Luc Sardarc, a Paladin who also aspired to become a Blademaster. They were involved romantically, but throughout their adventures it became apparent that Frimelda was superior with the arts of the blade. Luc allowed his envy and spite to overcome his love for Frimelda, and poisoned her with a drug, which is assumed to be Zombie Powder.

Leaving Frimelda for dead, Luc took the Fallen Angel and set out to gain the fame he could never attain while in Frimelda's shadow. Frimelda's will to live strong enough to render her a zombie, trapped between the realms of life and death.

At first, Frimelda is not aware of whether she had died, nor of the reason for her undead state. Her speech and thought processes have become severely impaired by her condition and is prone to bestial utterances. Seeking to cure this, Frimelda puts up a quest at the pub, requesting a clan member bring her some potions. Luso Clemens accepts her quest and brings them to Frimelda at Tramdine Fens. The zombie only reveals her surname, calling herself Lotice. After the potions have an adverse effect on Frimelda, she realizes she is dead, or at least undead.

Frimelda continues to search for a remedy and along her journeys, is often mistaken for a monster. When Luso is called to investigate Frimelda's presence near the city of Fluorgis he finds she means no harm and was only roaming the city to see the sights. After she departs, Cid recognizes her as the blademaster Frimelda Lotice.

When Luso is enlisted to defend a Chocobo Ranch at Muskmallow Field he meets the Parivir Ghi, who is searching for Frimelda. Luso and his clan assist Ghi in defeating the seeq Swordking, who underestimates Ghi's skills and petrifies himself in shame after his defeat. Ghi returns to his quest to find and engage the blademaster in battle.

Another petition reaches Luso's ears, this time a request from a troubled man to defeat an entity that is haunting him. Traveling to the Field of the Fallen, Luso, Cid, and Adelle encounter Luc Sardarc, the petitioner. He beckons them to slay the beast that has been stalking him, who reveals herself to be the zombie Frimelda, whom Sardarc does not recognize.

Cid opens the Paladin's eyes, and at first Luc is rendered speechless that his would-be victim still treads the earth. Sardarc regains his composure and tells Frimelda the story of her poisoning, vowing to put an end to her as well as to Luso, Cid, and Adelle, who join Frimelda in battle. They defeat Sardarc together, who admits his sins and asks Frimelda to finish him off. The blademaster refuses, instead reclaiming the Fallen Angel, as a gift to Luso's Clan Gully, and sending her wounded murderer away, before leaving herself.

I walk the road I walk because it is mine to walk.

Clan Gully receives an anonymous petition that asks them to deliver something of a certain "great master of the sword". Luso and his clan collect the item at the Nazan Mines, which turns out to be a curative potion that holds the power to cleanse Frimelda from her undead state. They deduce that the Witch of the Fens created the cure and created the bill at the pub.

Luso brings the cure to Frimelda in Kthili Sands, where he is surprised to find Luc Sardarc protecting her from a hoard of Ghouls. Sardarc insists he has turned over a new leaf, and helps Clan Gully and Frimelda drive off the ghouls. With the danger averted, Luso restores Frimelda to her full self with the potion in a blaze of red light.

Sardarc falls on his knees and asks the blademaster to slay him for his actions. Frimelda refuses, and humbly brushes off Sardarc's praise. Still unable to comprehend the depth of Frimelda's forgiveness, Sardarc leaves the desert. Frimelda thanks Clan Gully for their efforts, and joins their clan.

The blademaster's story continues when Ghi Yelgi hears of her resurrection. It transpires that it was Ghi himself who agreed to sacrifice his health and life to the Witch of the Fens so that Frimelda could be restored. Ghi posts a mission at the pub and waits in the Ruins of Delgantua to face Frimelda one time before he would die. Frimelda agrees and battles Ghi one-on-one. After the grueling battle, she realizes that it was Ghi who had sacrificed his health to restore her. With Frimelda's condolences, Ghi leaves to find a suitable place to die, satisfied knowing he fought the true blademaster.

In her zombie form, Frimelda can be healed by dark-elemental spells (Evil Gaze, Dark, Darkra, Darkga, etc.) and dark-elemental weapons (like the Hades Bow) like any other zombie.

Once the player has resurrected her, Frimelda will offer to join the clan. As a Paladin, she comes with the pre-mastered Dual Wield ability, along with both the Lohengrin and the Save the Queen swords, and has higher than usual Strength. She comes with the Paladin Skills of Nurse, Defend, and Cover already mastered. Like Adelle, she has access to hume jobs and can wear Ribbons and other female-exclusive equipment.

The following quests must be completed to recruit Frimelda: 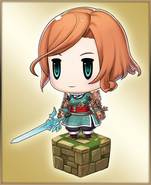 Frimelda appears on a card.

A user could dress their avatar as Frimelda in the Square Enix Members Virtual World community.

Final Fantasy Tactics A2: Grimoire of the Rift
Italiano
Community content is available under CC-BY-SA unless otherwise noted.
Advertisement