Freeze (フリーズ, Furīzu?), also known as Chill, is a recurring ability in the Final Fantasy series. It is a strong Ice-elemental spell, often serving as the final form of Blizzard magic. The spell sometimes inflicts Stop on the target.

While sharing the same name in the European releases of Final Fantasy IX, the Blu Mag spell known as Freeze is actually a separate ability known as Blaze (ブレイズ, Bureizu?) in Japanese.

Freeze is used by the Ice Dragon in the Advance and subsequent remakes when fought again in the Dragons' Den. It inflicts Stop on one party member.

Freeze is the first spell available on the Contain Materia. It inflicts heavy Ice damage and Stop on the enemy for the cost of 82 MP. The chance to inflict the target with Stop is 68%, making it more accurate than the actual Stop spell itself. The spell has a base spell power equal to 5.9375x the base magic damage.

It is also an enemy ability used by Maximum Kimaira.

Freeze is an Ancient Magic spell learnable for Black Mages at level 50, dealing heavy ice-elemental damage. It also inflicts a weakness to Fire on the target for a short period of time.

In addition, an upgraded version known as Freeze II also exists in the game, dealing greater damage than its predecessor.

Deals ice-based magic damage to all enemies. The less HP Lightning has, the more powerful this attack becomes.

Chill is an magic ability that deals ice-based magic damage to all enemies. The lower Lightning's HP, the more powerful the attack is. At level 1, it costs 100 ATB, has an attack power of x10.00 and a Stagger Power of A.

Chill Lv. 1 can be found in a treasure sphere at the Altar of Judgment, one of the four Trials in God's Sanctum (there is a rare chance to obtain Chill with an increased Attack value of x11.00. The game's internal random number generator affecting this probability can be reset by reloading a game that was saved prior to opening the treasure sphere). Chill is a rare drop included in Snow's loot table (Hard-Mode). Chill Lv. 3 is a Locked-Ability on the Astral Lord Garb.

Freeze is a Black Mage spell available after completing the "You'll Never Go Back" job quest at level 35. The ability deals ice-elemental damage with a potency of 100 to an enemy and all enemies surrounding it. When the spell is cast, it grants the Umbral Ice III effect for 15 seconds, grants one Umbral Heart, and removes Astral Fire.

Freeze is the ultimate ice elemancy spell and is capable of breaking the damage limit. It inflicts massive ice damage on all enemies Freeze is created by adding a catalyst that grants Limit Break while making a Blizzard-type spell.

Freeze is the final form of Shantotto's Spirit Magic: Ice, and is cast when her Brave is above 6,000. It summons a large shard of ice above the opponent that slams them downwards.

Freeze was an ability card for players to obtain, allowing the player to deal INT-based damage to a boss enemy.

In addition, Freeze was an ability for some Papalymo and Aerith Legend cards, being INT ability cards. When summoning either character, they would greatly damage the targeted enemy with Freeze.

The Final Fantasy XI incarnation of Freeze is the default Soul Break for Shantotto, dealing moderate magic ice damage to all foes.

Freeze has appeared in other Square Enix titles as an ability, referencing the Final Fantasy version of the spell.

Freeze, also known as Deep Freeze, appears as a recurring ice-elemental magic attack in the Kingdom Hearts series. It is a usable attack for Sora in Re:Chain of Memories and Dream Drop Distance, while being a high tier ice-elemental deck command spell in Birth by Sleep for Aqua. It attacks all enemies for ice-elemental damage and stuns them in a block of ice for a period of time. In addition, Vexen is also able to use the Freeze sleight when fought as a boss in all versions of Chain of Memories.

Ultra version of Freeze in Ehrgeiz: God Bless the Ring. 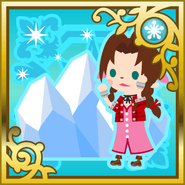 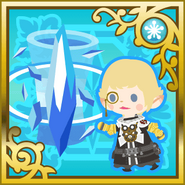 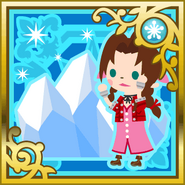 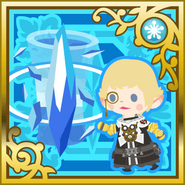 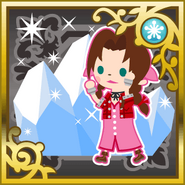 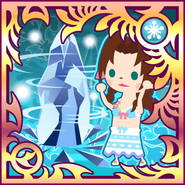 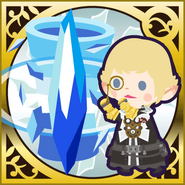 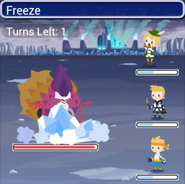 This gallery is incomplete and requires Final Fantasy Record Keeper added. You can help the Final Fantasy Wiki by uploading images.
Black Magic
Community content is available under CC-BY-SA unless otherwise noted.
Advertisement