One of the viera, a mysterious race that dwells among the trees. Fran turned her back on the Wood and her people to see the wider world. Now she travels Ivalice with her sky pirate partner Balthier, with whom she shares a deep and powerful bond.

Fran is a playable character in Final Fantasy Record Keeper who can be recruited as the First Time Reward for completing the Core Dungeon Nalbina Dungeons.

Fran is one of many characters whose assigned ranking scores betray her value. A capable markswoman, she is most at ease with bows, yet unlike most Rangers, she has good HP growth. She can be quick to unleash one of her devastating Soul Breaks, or simply wear foes down with an array of Support and Celerity abilities at her command. Fran is a solid acquisition entering the middle game, and well worth the trip taken to add her to the party. 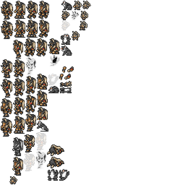