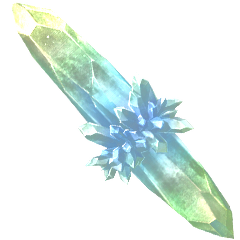 Fragments are little nuggets of information like frozen shards of time. You just have to touch them to fill your head with what's inside, kupo. You see, they are made of the same crystal that's inside the Oracle Drive. That's how they hold memories and stories and so much more.

Fragments (フラグメント, Furagumento?) are items displaced by paradoxes, a means of integrating the in-game menu into the storytelling process, and gameplay objectives in Final Fantasy XIII-2. They can be obtained by various means: progressing through the storyline, winning a certain battle, unveiling them with Mog's Moogle Hunt ability from where they are hidden by time paradox, or through quests. The fragments are inscribed with tidbits of knowledge, folklore, and legends that can be viewed in the Fragment section of the menu. There are 160 fragments to collect and there are several held in each time period.

Fragments are organized two ways, each with a set of sub-categories. Locations lists the missions in that location, which is more of an organization by a game mechanic. The Categories set is organized either by the source of the fragment texts, as with Great Mog Wisdom and the diaries from Lenora's Garage, or by their subject, as with the paradox ending texts. When specific sets of fragments are collected, Fragment Skills, such as Paradox Scope, can be unlocked by the Mystic in Serendipity.

Achievements can be earned in this way, as well as new fragment missions. For example, collecting the Crimson Memories fragment set unlocks the Fragmented trophy/achievement and creates a time distortion and a cutscene leading to the mission to kill Ugallu and gain its fragment. Collecting fragments can be a source of artefacts, which then can unlock more fragments. As an example, the full set of Graviton Core fragments are required to obtain the Vagabond Artefact and its accompanying paradox ending, itself a source of another fragment.

Fragment Skills are additional skills. After completing the required objectives, speaking with the Mystic at Serendipity in the building tucked away in the southwest corner of the map unlocks the skills.

The Honor of Blitz Squad[]

The Fruit of Fenrir.

Serah and Noel obtain a fragment at Coliseum.