I've been waiting in this Coliseum for so very long now! I was starting to worry that you'd never download this part of the game and I'd be stuck in digital limbo!

The fourth wall is a performance convention in which an imagined wall separates the actors from the audience, and the actors act as if unaware they are being watched. Breaking the fourth wall refers to the actors acknowledging the audience in any way, or the fact that it is a stage production, and calling attention to things such as the props on the set not actually being real. In the context of video games, the term refers to the characters being aware they are in a game, or acknowledging the player or typical gameplay elements that exist for the player's sake. A common way for in-game characters to acknowledge gameplay elements is when the game is teaching the player how to play, characters mentioning button prompts or asking the player to perform certain actions. In the earlier Final Fantasy games, the tutorial area was often a Beginner's Hall.

In some games, elements like save points are acknowledged by the in-game characters as existing features in their world, whereas in others the fact that there are objects that can be used to save the game is ignored. In other games gameplay elements are more seamlessly incorporated, such as in Final Fantasy IX where save points are moogles that record the events in their journals when spoken to. As another example, fast-travel is typically only for the player, and no one in the world acts like people can actually teleport on a whim. Music is usually considered something only the player hears, so a character singing or humming a theme from the game breaks the fourth wall. An element from the game interacting with the player's screen, such as trying to break through it, is another example of breaking the fourth wall.

Final Fantasy games often allude to other entries in the series, and elements from other games can make cameos in them, but these are not usually fourth-wall-breaking. Elements of the real world appearing in Final Fantasy are likewise not usually treated as a break in the fourth wall, such as the map of the real world being in a game in some form, or the presence of product placement. Breaking the fourth wall is not overly common in Final Fantasy, and tends to be concentrated on certain comic relief characters. A recurring fourth-wall-breaking location in the series is the Developer's Office, an area in a game where the player can talk to the people who made the game.

Developer's Office is a recurring secret location in games set in the Final Fantasy IV universe. It is populated by characters that represent the game's development team who offer information on their role and some engage the party in scripted battles. In the 3D versions, the Developer's Office is in the same location as in other releases, but its members are changed to be the staff of the remake instead of the original release.

A dancing girl in Jachol invites various NPCs from the crowd to dance with her, and ends with an invitation: "And you on the other side of the screen, let's dance."

When Krile Mayer Baldesion rendezvouses with her grandfather, Galuf Halm Baldesion acts like he doesn't recognize her with a question mark appearing over his head. He then remembers that his amnesia had already been cured, and tosses the question mark off the side of the screen.

Uniquely, Final Fantasy VI is presented as a stage production in parts. The game ends with a curtain call showing who each character was "playing", the last accolade being for the player themselves.

Sabin talks to the player and teaches them how to perform a Blitz during the battle against Vargas, and assures the player that they have enough time to perform it. After recruiting Gau, Kappa the Imp teaches the player on how to use the Rage and Leap commands. Mog also acts as the minigame's tutorial presenters, explaining how it works.

The player is placed in a location, "Scenario Selection", where Mog asks the player to choose between Three Scenarios.

Locke Cole breaks the fourth wall when engaging Ultros in the Esper Caves. After Relm Arrowny appears, he approaches the dialog box and says to himself while looking to the player, "A pint-sized virtuoso and an egotistical octopus, do I wanna know what's next?"

If Relm is in the active party when a battle commences, she will wave to the "fourth wall" before facing the enemy.

When Barret Wallace gets angry at the 7th Heaven basement, he throws Biggs at the player's screen, but he bounces off it. However, the player's screen could also be taken as being the actual ceiling for the room, as it is from a top-down perspective.

When Cloud Strife visits Beginners Hall in the Sector 7 slums, he will advise the people in the room, a subversion of the traditional tutorial area in the series. He will find a talking save point and a treasure chest, and talks to a cursor after he realizes there is a floating finger pointing at him.

In a typical RPG fashion, the player is able to visit houses in towns and look into people's drawers, chests and closets for items. This is lampshaded in Wutai Village where a little girl is the only one in the game to point out how rude it is for strangers to come into people's houses uninvited.

In the French localization, rather than not being able to speak due to an injury, Ward voluntarily refuses to speak "until the game is finished" after Laguna tells him that "thinking negatively draws bad luck". Elsewhere in the same version, Squall berates the Forest Owls for sending him to awaken the princess, remarking that this is not a fairy tale, but a video game.

During the Battle of the Gardens, there is a save point in the area outside the infirmary that doesn't appear in other times. If the player idles in this area, a "Supply Team Personnel" comes up to the save point and kneels besides it. If talked to while they are doing it, they say "Save point up and running sir!"

An NPC maintains a save point.

In Lindblum, after the Festival of the Hunt, Zidane can meet an old lady called Grandma Potpourri, who asks Zidane if he enjoys what he's doing. One of the possible responses to her question is "No, this game sucks". If this option is selected, she will advise the player to go buy a different game.

The existence of save spheres and how they can be used to fast-travel to the airship is usually ignored. However, after the events of Macalania Temple, O'aka XXIII gives a brief wave before apparently using the sphere to teleport away. The cactuar called Elio also uses the save sphere during cactuar sidequest. Additionally, Braska uses the one just before the Zanarkand Dome's Cloister of Trials in a flashback.

At the end of the final expansion Rhapsodies of Vana'diel, Iroha breaks the fourth wall by thanking the player for saving Vana'diel for fourteen years.

In Gilgamesh's DLC battle, he comments that he was starting to worry the player would never download that part of the game, and he would be stuck in "digital limbo".

The raindrops will sometimes hit the "screen" in certain time periods when it is raining, as if there's a camera following Serah and Noel around while the raindrops are splashing on the camera lens.

The Eighteenth Floor was the Developer's Office where the developers of the game made cameo appearances during the 2015 edition of The Rising seasonal event.

In the battle of Deltascape V3.0, the players have to solve a set of puzzles on the floor with the signs of Tank, Healer, and DPS. These signs are supposed to be seen and known only to the players, not the in-game characters.

Prompto Argentum makes pop culture references, mimicking old song lyrics and lines from previous Final Fantasy games. At times he refers to their adventure being an RPG, saying "It's a good chance to earn some experience points" when the party is heading to a battle. He comments on the party's journey being "a real life RPG", or "just like King's Knight", a mobile game that exists both in-universe and in the real world as a Square Enix product. He might hum the traditional Final Fantasy "Victory Fanfare" after a successful battle, or sing the "Chocobo Theme" that plays when the party is riding on chocobos, saying he "can't get it out of his head". When the party comes across a locked door to one of the Menace Beneath Lucis dungeons, he remarks that he wishes they had a key that can unlock any door "just like in video games".

At the end of Final Fantasy XV: Episode Prompto, Ardyn watches Prompto from afar while humming the "Victory Fanfare".

Final Fantasy XV: Episode Ignis has a dummied "friendly match" against Noctis with fourth wall-breaking dialogue of Noctis complaining Ignis being the main character, stealing his spotlight. The win and lose dialogues are about the two arguing who has more fans.

Balthier, who refers himself as the "leading man" in Final Fantasy XII, seems to see his appearance in The War of the Lions to "have more the feel of a cameo role".

If the player tries to dismiss Ramza Beoulve from the party during chapters II and III, he will directly adress the player and tell them that his presence is necessary in order for them to learn the truth.

Developers' Room is a special location accessible from a house in Harmonia after Chaos Elgo has been defeated. The team can meet some of the game's developers here, who are depicted as NPCs.

As in the first Dissidia, Kefka sometimes hums the victory fanfare when he wins.

When Gilgamesh initiates his EX Burst, he will smash face-first into the player's screen. Feral Chaos's EX Burst meanwhile ends with him delivering a punch that appears to turn off the player's PlayStation Portable screen. 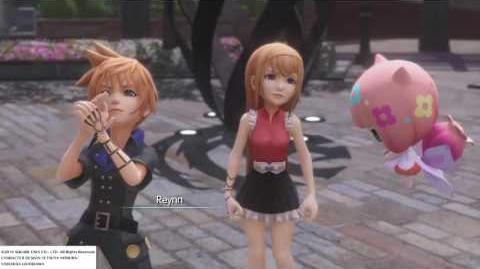 When Lann learns he can't imprison Mirages that already have a master, he says "Ugh! Fire whoever wrote that little hook in." Reynn gets annoyed with him and says "Lann! Ix-nay on the fourth wall stuff!"

When Lann and Reynn meet Serafie, the conversation descends to various food related puns. When Lann asks for food he appears to browse an invisible menu in the air. When Serafie tells them about fast-travel that can be used from the GUI (graphical user interface), Reynn says Serafie is not allowed to "go there", whereas Lann fixates on the food being offered being "gooey".

At the 2010 E3 Square Enix showed a demo of the game with a town made for it whose occupants acknowledge the player is playing a demo.[1]