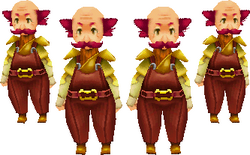 The Four Old Men (4人組のじいさん, Yonin-gumi no Jīsan?) are non-player characters from Final Fantasy III. Originally from Amur, they believe that they are truly the Warriors of the Light despite the townsfolk ridiculing them. In the sewers of Amur, the Warriors of the Light have to rescue them from four Gigantoads (Goblins in the NES version). Afterwards, they return the favor by warning them about the fake Levigrass Shoes from Delilah. One of the Four Old Men is summoned by Unei and Doga to rescue the Warriors from Xande's Curse of the five wyrms.

In the 3D versions, they can be sent letters through Mognet.

The soundtrack contains the "Four Old Men's Theme", and it is played in some cutscenes at Amur and its Sewers. This piece was also used in Chocobo Racing as "Pleasant Journey". It is available as a battle background music for Dissidia 012 Final Fantasy as part of a downloadable content pack of three tracks from Final Fantasy III.

The Four Old Men and Doga (3D).
Add a photo to this gallery