The Four Lords are a group of four deities of Othard in Final Fantasy XIV. 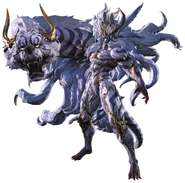 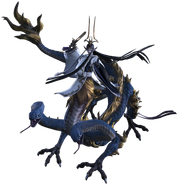 Seiryu (battle form render)
Add a photo to this gallery

[view · edit · purge]The Four Symbols (Chinese: 四象; pinyin: Sì Xiàng) are four mythological creatures in the Chinese constellations. They are the Azure Dragon, (Qing Long) of the East, the Vermilion Bird (Zhu Que) of the South, the White Tiger (Bai Hu) of the West, and the Black Turtle (Xuan Wu) of the North. While originating from China, the Four Symbols are also widely known in Korea, Japan and Vietnam. Each region have distinct names for the symbols. In Japan, the Shijin, as they are collectively known, are called Seiryū, Suzaku, Byakko and Genbu respectively.