Forza, also known as Faltzer, is a boss in Final Fantasy V. A hunter, he travels around with his wife Magissa, looking for things that will give a good bounty. He joins his wife mid-battle.

Magissa summons Forza to a battle against her. Forza's attacks are powerful and Magissa will focus less on attacking the party, and more on healing Forza. His regular attack will deal some light damage, but his Tackle attack is powerful.

Forza does not have to be fought at all if Magissa is defeated so fast she has no time to summon him. In this case the player does not earn Forza's bestiary entry.

Lenna should already have been cured of Poison by the time Forza is summoned to battle. The party should keep on attacking Magissa rather than switching focus to Forza, as she keeps healing him.

Once Magissa is out of the way, Forza should not prove too difficult. The best job to use is the Knight. Monk class should be avoided as they will not easily survive the attack. If the player is using mages, the Knight should Cover them if they are getting low on HP.

A quick way to defeat him is to break a Frost Rod, which can be found in Carwen, instantly killing him and Magissa. A funny way to take care of Magissa is to Confuse Forza, forcing him to attack Magissa until she is dead.

Additionally, one can put Forza to sleep and hit him with magic attacks.

Magissa and Forza appear as enemies in Final Fantasy Record Keeper. The elite version of this battle is famous for being extremely hard for parties capped at level 50. Forza's attacks can kill off almost every character in the game with one or two shots with or without Protect. He is vulnerable to Sleep, while Magissa is vulnerable to Silence, rendering both useless. 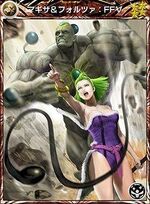 Retrieved from "https://finalfantasy.fandom.com/wiki/Forza?oldid=3238150"
Community content is available under CC-BY-SA unless otherwise noted.