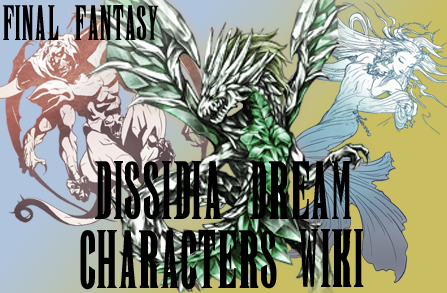 But like, we should come up move sets for characters! I'm not bored of our famed Dissida cast already, but come on, you know there are characters out there that deserve a chance in the spotlight!

And as of today, as well as a month ago, you can post up your own moveset for your favorite Final Fantasy Character, as long as you don't erase the movesets that existed before yours.

We here at Dissidia Dream Characters have made our own wikia for DDC!!

We welcome all to our new wiki!

We need to fix the oldest movesets to conform to the current DDC style and the DDC Wiki style. Link to the DDC Wiki is right above this line. Pikmin Master 16:54, April 3, 2012 (UTC)

Because this site can't contain all of fanwank, we've decided to archive our works in a nice, organized fashion. Hope you don't mind now~

To be Moved to DDC Wiki[]

The main story may be over, but who knows? Maybe we can make a sequel. Let's make this a story from FFWiki for FFWiki and for the multiverse of gaming!

The currently active in indefinate hiatus sequel is here.

If there are more than ten, or if a month passed since the achievement, delete the topmost achievement.

If you have commented on a moveset, make sure you notify the others here, otherwise, the comment will likely not be read.

If you made something that is not a moveset and not a comment, but is in the DDC scope, like made an enemy or alternate costume or made artwork, etc., tell us here.

Want to use an idea, but fear it might piss off other users? Have a petition here. Limit of five at a time. When a petition is complete, delete all content related to it. Do not vote yes or no to your own petition.

If you have a problem with the moveset colour scheme then say so and I'll change it. Although I'll probably leave the 'original' dissidia character movesets with the Duodecim scheme. If you want anything else changed on DDCWiki, just ask. Balthierfan 21:45, May 15, 2012 (UTC)

Activity here and at the DDC wiki is been practically nil. Where are all of our previous creators - given up? busy? Doin finals, studies or exams? don't care anymore? Lets have some honesty here. Who is still interested? Balthierfan 21:39, June 16, 2012 (UTC) (Ps. I'm doing uni exams and work so there's my truth)

I still care about Dissidia Dream Characters. Sorta. Been dealing with personal creative deals, so I was pretty busy....

Other than that, I'm here. Just not that hardcore into it, but still here. ^^

I'm honest, we just need more people here. It's not anyone's fault here really... Maybe I could whore it out elsewhere? :3

Could be tricky - there's quite a few boot items in the accessories (e.g. Winged, Desert, Miracle) and Darts and Dice are already included in the Thrown Weapons. Scythes should be interesting though. Balthierfan (talk) 09:58, July 14, 2012 (UTC)

Hey, since I'm a huge Equipment buff, I have some suggestions for our DDC Armory.

I also have an idea; we also have a system call Affinities, where specific weapons are the Ultimate weapons for their respective true owners, but for others, they have different effects and requirements to equip?

Masamune (FFVII): A wide, sleek and slender katana, gripping all into fear who see this blade in action. Brimming with a subtle yet vitalizing energy, it is said that the weapon is only worthy of one exceptional warrior....

Everyone else: like Halves initial Brave, Attack plus 70, Defense minus 20.

This is because I believe that weapons should be accessible rather than exclusive, because of the wide characters, and that having exclusiveness limits the variety of weapons to a great degree.

GREETINGS THERE FRIENDS AND NEWCOMERS! This is Mask no Oni reporting in after a near 1 and a half months away from you all! I wish you all are in great health and doing great out there in the world ;3

A major update from me, I'm getting ideas to formulate and create fighter based esque movesets, that are unlike Dissidia in someway and form; nonetheless I feel it's important to say such a thing because I'm feeling more of a vibe from that than I do with Dissidia, sadly nowadays.

But indeed, I've more or less moved on a bit- But my spirit lives on. I'll be around still ;3 and who knows? You might see some new stuff. I'm going to work primarily on refining older movesets of mine, because that's been bugging me more lately.

I'll see you all later and around friends.

I'm trying to keep the wiki 'ticking' slowly by transferring some of the material here over to the wiki (link on top of this page in case you missed it), but please feel free to add sets if you like - just follow the guidelines. I think that you will need an account though to make pages/sets though. Balthierfan (talk) 11:24, November 12, 2013 (UTC)