A natural fortress surrounded on three sides by sheer cliffs. Served as a first line of defense during the Fifty Years' War.

Fort Besselat, also known as Bethla Garrison (ベスラ要塞, Besura-yousai?), is a location in Final Fantasy Tactics. It is the stronghold of Duke Goltanna and the Order of the Southern Sky.

Upon entering the fortress, the player has to choose between making a frontal assault on the North Wall or sneaking in through the South Wall. The six guards at the North Wall have a height advantage, but there are less of them than the seven at the South Wall; furthermore, one of the South Wall guards is a Ninja. Either way, the party will have to fight one battle and then continue to the sluice gates inside the fort.

A natural fortress surrounded on three sides by sheer cliffs and the Burgross Sea to the south, Besselat served as a first line of defense against Ordallia during the Fifty Years' War. During the War of the Lions it is besieged by the Order of the Northern Sky in the Battle of Fort Besselat. During the battle, Knights Templar under Barich Fendsor unleash mossfungus poison on the Northern Sky as part of the Lucavi plot to destroy both Orders. Ramza Beoulve opens the fortress's sluice gate, flooding the nearby plains, and bringing the battle to a halt. Duke Goltanna orders his troops to press on, but Delita Heiral assassinates him, halting the War of the Lions. Dycedarg Beoulve puts his plan to kill Duke Larg into effect, and seizes control of the Northern Sky to fulfill his ambition to become the regent of Ivalice. 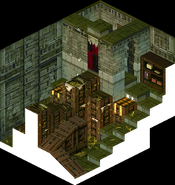 A Northern Sky-held fort known as the Banished Fort, where Larg is killed.

The battle at the North Wall, if Ramza chooses to attack head-on.

The battle at the South Wall, if Ramza chooses to sneak in.

The battle at the sluice. 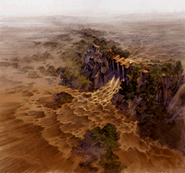