The Fork Tower is a location in Final Fantasy V seen on Galuf's world, but accessible only in the merged world. Divided into two halves, the tower houses the ultimate Black and White Magic spells Flare on its left (magic) half and Holy on its right (physical) half. The Fork Tower can be visited after completing the Island Shrine. Completing it is necessary to access the Catapult.

The Fork Tower appears to predate the world being split. Villagers of Crescent mention "ancient poems" that describe the tower,[1] and writing on the tablet at the Island Shrine mentions the Fork Tower as the "twin houses of the strongest magics".[2] Though the Sealed Tome calls the spells as "the ultimate spells of white and black", it does not reference the tower directly.[3]

When Exdeath merged the worlds again, the Fork Tower buried the Catapult. The Light Warriors read about the existence of the spells in the Library of the Ancients. Sekhmet, when defeated in the Pyramid of Moore, warned the warriors of Minotaur's presence in the Fork Tower.[4]

When the Light Warriors obtained the tablet in the Island Shrine, the barrier at the Fork Tower's entrance dissipated. Reading the writing on the tablet instructing them to remove both spells at once, the party split in two and obtained both Flare and Holy, defeating Omniscient and Minotaur, respectively. Afterward, the tower disappeared, revealing the Catapult and allowing the Light Warriors to free Cid Previa who upgraded the party's airship to include submarine functionality.

In Galuf's world, the tower can be found southeast of Castle Exdeath, although it is inaccessible as it is surrounded by mountains. In the merged world, it is above the Catapult and just west of Crescent.

The two halves of the Fork Tower are identical in layout. The Fork Tower is a tall stone structure resembling the medieval castles found throughout the worlds. On its first floor, teleporters take visitors to either half of the tower.

The Fork Tower can be completed after the Island Shrine, and is necessary to complete both halves to obtain Flare and Holy, but also to obtain submarine functionality and find the remaining tablets.

Each tower is divided between physical power and magical power. In the left tower, enemies only use magic, and physical attacks are ineffective and result in powerful counter-attacks. The right tower has enemies that only use powerful physical attacks, and magic is unable to be used at all in battle. Atop the tower lie the two spells; the parties must fight a boss each, and both spells must be obtained simultaneously. After defeating the first boss and obtaining the first spell, if the other party spends more than a few seconds before triggering the next boss fight, the tower will explode and the game will be over. 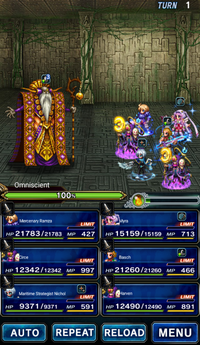 The top of the Fork Tower's right tower (GBA).

The Fork Tower in the merged world (GBA).