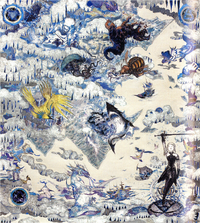 "Forever Today" is the ending theme song of the expansion pack of Final Fantasy XI Seekers of Adoulin, available in game via the November 2014 version update. It is composed by Naoshi Mizuta and was originally performed by Mika Kobayashi.

"Forever Today" was included in the Seekers of Adoulin Original Soundtrack PLUS album as well as the Final Fantasy XI Priceless Remembrance blu ray album. Both albums contain an EP version of the song and the latter also comes with an instrumental version.