The Forbidden is an enemy in Final Fantasy VIII. It is an undead skeleton monster.

Undead soldier. Not afraid of death. Its death blow kills enemies with 1 hit.

As an undead enemy Forbidden takes half damage from physical attacks, is weak to Fire and Holy, is immune to Death and Doom and dies instantly from resurrecting abilities and items.

Forbidden uses sword attacks and magic. When its HP has dropped by 85%, Forbidden will change its tactics and use Iai Blow, which will cause Instant Death to a targeted character. Characters immune to Instant Death will receive normal damage.

To dispose of Forbiddens in a single hit, one can use the Revive command taught by GF Alexander. Life, Full-Life, and Phoenix Downs will have the same effect.

Forbidden is a Level 3 Triple Triad card used for playing the minigame and for turning into Betrayal Swords with Quezacotl's Card Mod. 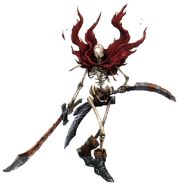