Detects by Sound
Detects Low HP
Communal Hate
List of Fomor Enemies
Fomors are the spirits of those who were slain during battle. Fomors look like normal characters with black skin and glowing eyes. Their names usually follow the pattern of "Fomor (Job)," for example, "Fomor Thief."

The Fomors in Dynamis are the corrupted souls of the "multi-national" strike force (the majority being San d'Orian) known as the Hydra Corps who were transported to the Shrouded Land of Dynamis along with the elite beastmen units—the Forlorn Vanguard and Dark Kindred.

The Fomors in the Near East are the souls of the fallen Ephramadian soldiers in the war between the Kingdom of Ephramad and the Empire of Aht Urhgan long ago. Unlike the Fomors of Tavnazia, they do not possess any type of "Fomor Hate." There are also Fomors in Arrapago Reef that are the souls of those who have fallen in the struggle for the Astral Candescence. They too do not possess any "Fomor Hate."

Fomors come equipped with jobs, and will readily use the spells granted them in addition to their special attacks. 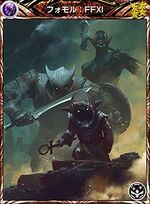 In Irish mythology, the Fomoire or Fomorians are a semi-divine race said to have inhabited Ireland in ancient times. They may have once been believed to be the beings who preceded the gods, similar to the Greek Titans. The race are known as the Fomoire or Fomoiri, names that are often Anglicised as Fomorians, Fomors or Fomori.