Long
The Fomalhaut is a gun in Final Fantasy XII. It is the ultimate gun in the original version, and second best to the Mithuna in the Zodiac versions.

In the original version, a good strategy is to equip the Fomalhaut to a character with the lowest attack in the party (such as a mage), as guns use pierce formula, which takes into account neither the user's or the target's stats. When used with the Dark Shot while equipping the Black Robes, the player also gets an additional +50% boost to damage, making it a good weapon against even Yiazmat.

In the International Zodiac Job System version the guns are restricted to the classes who own the licenses, which prevents this strategy. The The Zodiac Age also has this restriction, however players can access a second board. Thus, mages can take on Machinist, or Shikari provided they have the Shemhazai license, to gain access to the Fomalhaut. In The Zodiac Age the Mithuna is more powerful than the Fomalhaut and only accessible to the Machinist, but only one of them is available in the game.

In the original version, the Fomalhaut is only obtained from randomly spawning treasure chests and because the chests respawn, the player can obtain multiple Fomalhauts. The Fomalhaut chest may spawn in the Lhusu Mines, Cerobi Steppe, Henne Mines, or Subterra. The Lhusu Mines chest is on Site 9 in the place where Antlion is fought. At the back of that cave, there is a chest with a 60% spawn rate with a 50% chance to contain the Fomalhaut (the other treasure is a Knot of Rust). The player must not equip Diamond Armlet, or the Fomalhaut changes into an Elixir. This is the earliest point Fomalhaut can be acquired, available after reaching Mt Bur-Omisace. The player may backtrack to the save crystal to make the chest respawn, or use the soft reset function.

In the Zodiac versions, Fomalhaut is obtained from Henne Mines (Phase 2 Dig) as a guaranteed yield as long as the player claims the treasure. It is also available from Cerobi Steppe (Feddik River) with the Diamond Armlet, but getting it is rare, and as an uncommon steal from Elza in Trial Mode Stage 86.

Vaan wields the Fomalhaut in his attacks when in EX Mode. Vaan's weapons are from Final Fantasy XII, and his normal and EX Mode weapons are among the weakest and strongest equipment in their respective equipment types. 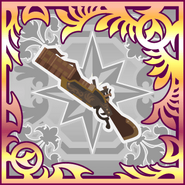 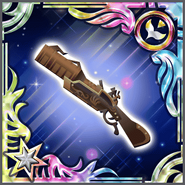 Fomalhaut is a weapon.

Fomalhaut has a sprite.

[view · edit · purge]Fomalhaut is a star in the constellation Piscis Austrinus. The name comes from the Arabic fum al'hawt, literally "mouth of the whale", and is also known as "the lonely star of autumn", when it is the only first-magnitude star visible in the sky from mid-northern latitudes. Fomalhaut is also a fallen angel from the Book of Enoch.