Fog (フォーグ, Fōgu?, lit. Forg) is a recurring spell and status ailment caused by said spell in some installments.

Fog is a White Magic spell which causes the Amnesia status on one or all targets, and is Mind-elemental. As with all spells, its success rate increases with every successive spell level. Any character can learn Fog by having them use the Fog Tome (Fog Scroll in Final Fantasy Origins). The Rune Axe casts Fog when used as an item.

Fog is an enemy ability which drops the target's MP to zero. Another two enemy abilities, Fear and Fearga, also reduce MP, albeit partially.

Fog is a Saboteur ability that deals magic damage to one target and may apply the Fog status. with a base chance 20%. It has an ATB cost of 1. It can be learned by Sazh (stage 9), Snow (stage 7), Vanille (stage 8), and Fang (stage 7).

Fog is a Saboteur ability exclusive to Paradigm Pack monsters that deals magic damage to one target and may apple the Fog status. It has an ATB cost of 1 and a modifier of 0.35. It can be learned by Chelicerata (35), Dendrobium (39), Schrodinger (54), and Silver Lobo (40).

It is also an enemy ability used by Vaballathus.

Fog is an enemy ability used by Grendel and Parandus.

A Magic Book called Fog appears with a book icon before its name. It casts Fog, and can be bought in numerous towns across the various worlds for 6800 GP. It only has 30 uses, and also increases a Robot's HP by 45 when equipped on them. The damage formula for Fog is the user's Mana x10, deals Poison-elemental damage to one group of enemies.

The spell's Japanese name is "Forg". It is likely a shortened form of "forget" (フォーゲット, fōgetto?) to follow the Japanese naming scheme for spells. The use of グ (gu?) instead of ゲ (ge?) could be just so the word is a transliteration of the first four letters of "forget" (グ (gu?) is used for English ending-G sounds), or it could be an intentional pun on the word "fog" (フォグ, fogu?) in reference to "feeling foggy". 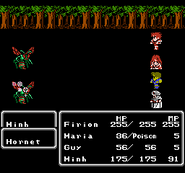 Fog1 cast on all enemies in Final Fantasy II (PS).

Fog7 cast on all enemies in Final Fantasy (GBA).

Fog cast on the party in Final Fantasy II (PSP).