Once rich in resources, this mine fell out of use in recent years, and serves as little more than a watering hole for wild beasts. According to Cor, however, a royal tomb lies in the quarry's depths, waiting to be uncovered.

Fodina Caestino is a location in Final Fantasy XV, northwest of Cartanica in the region of Succarpe in Niflheim. The area consists of an abandoned quarry, which has since been taken over by wildlife; Prince Noctis and his friends believe it hides a royal tomb.

The area has campgrounds, but the player can only eat Chilled Food Tin or Cup Noodles.

In Cartanica, the left end of the stationary train across from the Magna Fortia (the train the player recently disembarked), just past the rest area. This entry is missable if the player does not read it during Chapter 10, unless the chapter is manually selected post-game:

Quarry boasting the richest reserves in all of Niflheim. After the mines shut down, a variety of wild plants dug their roots into the rubble, defying the natural terrain and gradually transforming the arid basin into a makeshift marshland.

Although the quarry lies in imperial territory, the mines are said to house a royal tomb. Local legends say the oldest king in Eos is interred within, but many Cartanicans dismiss these claims as mere fabrications—tall tales trumped up by imperial trying to appropriate the legacy of Lucis for themselves.

The truth about the tomb lies buried somewhere beneath the silt and soil. Some suppose the daemon-deterring mausoleum was erected as a sign of friendship between kingdom and empire in an age when the two nations enjoyed amiable relations. The scars of war are visible across the land, while symbols of peace remain hidden from our sight.

I came to the Fodina Caestino thinkin' I’d pay my respects at the royal tomb. Little did I know they just put the place off-limits on account of some accident.

Cor Leonis has informed the group that a royal tomb lies in the closed quarry and Noctis and his friends decide to explore it to obtain the royal arm within. Due to Noctis's bereavement after Lunafreya's death, Gladiolus's is incensed, feeling that the future king isn't focusing on his mission to reclaim the Crystal and the throne of Lucis. Ignis has been blinded, rendering him vulnerable for the rest of the journey. The majority of the trip is marred by low morale, the group's bonds strained and tested as they learn to adjust to the devastating turn of events.

The nights have been getting longer and the great tree within Fodina Caestino is reported to be in bloom. According to a newspaper article scientists are puzzled that Fodina Caestino has been swamped by an enormous tree and some interpret this event as an omen, predicting the awakening and eventual annihilation of the gods.

The group slowly make their way to the bottom of the tree, taking care to not leave Ignis behind. Abandoned machinery blocks the path into the tomb, but they coax it into life, clearing a path. They find the area surrounding the tomb's entrance is a breeding ground for a hostile family of malboros. Ignis is forced to perceive the world differently than before, inspiring him to learn a new Technique, Libra Elementalis, which allows him to discern an enemy's weakness and exploit it; as the malboro is weak to fire, he sets it ablaze and renders it vulnerable to attack. Once the enemies are defeated, Noctis destroys the eggs laid on the tomb gates before entering the tomb proper to obtain the royal arm, the Katana of the Warrior.

Ignis cannot withstand his friends' shattered bonds and can no longer remain silent. He tells Noctis that, though the pain he feels over the loss of his fiancée is great, there are larger forces at work. The fate of the world rests on him fulfilling his destiny, giving him purpose and ensuring that his losses were not in vain. Ignis asks Gladiolus to exercise patience and empathy when dealing with Noctis, assuring that the prince will be ready when the time is right. Ignis asks the group not to patronize or wait on him, as he wishes to stand and fight under his own power. He doesn't want to burden his friends, whether his blindness is permanent or not, and regardless of danger.

With their morale restored the party leaves Fodina Caestino, boarding the train at Cartanica to continue to Tenebrae.

The enemies needed for the "Niflheim" section of the bestiary completion for this area are: Falxfang, Gurangatch, Malboro and Malboro Sprout. If the area is completed too quickly, or the player rests at camp as it gets dark, night-time enemies may not spawn at all due to the time of day.

Move over, Prompto—there's a new camera king in town.

Added in patch 1.23, the player can talk to a journalist near the stairs that lead to the quarry to start the quest. Noctis is tasked with manually taking photos of various landmarks within Fodina Caestino.

If nothing happens the player should move the crosshair around a little, adjusting the zoom until Noctis says he has the shot. The player must not exit out of the camera mode immediately after taking the shot, as the game may lag between the action of taking the photo and the game registering the action, possibly due to image processing. The photos must be taken in daylight, otherwise Noctis will say they need to return and try again the next day.

Returning the pictures to the journalist completes the quest. 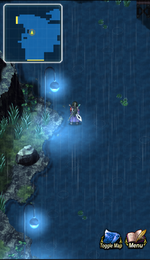 View of the whole quarry via the out of bounds glitch.

Ignis faces off against a Malboro.

Tomb of the Warrior.

Katana of the Warrior.