Boost MAG and SPR for all allies

Focus (集中, Shūchū?, lit. Concentration), also known as Inner Calm, is a recurring ability in the series. It is similar to the abilities Cheer and Boost, in that it increases a stat.

Despite their similar effects, this ability is considered separate from another recurring ability known as Focus in English localizations, with the latter's name meaning "to accumulate" (ためる, Tameru?) in Japanese.

Focus is a special ability that targets all active party members, and raises Magic and resistance to magical damage. Its effects stack up to 5 times per party member, and remain until the end of battle.

Focus raises the Magic stat by 1 point per cast; this can even raise the Magic stat to 260 during battle. It also reduces magical damage in a manner similar to the Shell spell; after a magical attack's base damage has been calculated, Focus reduces that damage by a certain percentage. Casting Focus once cuts damage received by 1/15 (or about 6.67%). Each additional cast raises this damage reduction to 2/15, 3/15, 4/15, and finally 5/15.

It is found in Lulu's section of the Sphere Grid.

Focus is a command on the Black Mage dressphere. Focus raises the caster's Magic by three points every use, stackable up to ten points. It costs 10 AP to learn.

Focus is an ability available to Monks (level 25). It increases their Accuracy. Its effect can be enhanced by equipping the Temple Crown. It can be activated every 5 minutes.

Focus is an enemy ability used by Great Tortoise, Clay Golem, Mythril Golem, Babil, Roblon, Goliath, Rocktoise, and Molen, which restores 30% of the user's Max HP with a CT of 3.

Inner Calm is an ability learned by the Berserker class for 250 AP from the Metal Knuckles. It increases the user's Evade.

Focus is an ability initially known by Ace and Cinque. It requires 4 AP for Ace and 2 AP for Cinque. It has Ace/Cinque perform a charged attack by tilting the left analog stick down and pressing

Focus II is an ability for Ace that requires 4 AP and is available after learning Focus. It increases the number of hits for charged strikes.

Focus is an ability known initially known by Jack. Concentrate to temporarily increase attack by tilting down the left analog stick and pressing

. Focus: Power ↑ requires 4 AP and is available after learning Piercing Gleam: AG ↓. It increases the effect of Focus.

Boost MAG and SPR for all allies 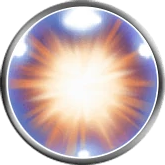 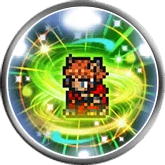