In other news, the recent thunderstorms have precipitated some unexpected consequences in Duscae. The stones sealing off Fociaugh Hollow, at the region's center, have collapsed due to the heavy rainfall. The Hunters wasted no time investigating the newly opened cavern, and already they report daemon sightings. Locals are urged to keep away from the cavern at night.

Fociaugh Hollow is a cave in Duscae region in Final Fantasy XV. In the Final Fantasy XV Episode Duscae demo, where it is known as Fociaugh Cavern, one of Armiger swords, Galatine, and the Astral Ramuh, can be found inside. The cave is at the southeast of the Duscae map, near a campground.

The cave is dark and the party's flashlights light up while inside. In numerous places the party must squeeze through tight spots. The only enemies inside are goblins, but they can appear in great numbers and overwhelm the party. At the end of the cave the party will acquire Ramuh, and then get the option to appear back outside the cavern.

Near the entrance, a bit to the north from the grotto, atop a rock formation.

Grotto tucked away deep in the woods of Malacchi Hills. After a recent string of incidents involving a speaking serpent who absconded with several small children, nearby residents dared not approach the mouth of the cave.

In their despair, the citizens called upon the aid of the former Oracle, Sylva Via Fleuret. After luring the snake-like daemon into the hollow, the Oracle trapped it inside. While no other kidnappings have happened since the sealing of the cave, one can still hear the hissing wails of the serpent within.

Perhaps coincidentally, several eyewitnesses say they spotted a woman marching toward the grotto a few weeks before the first incident was reported. The woman in question had allegedly lost her baby to a band of daemons and was presumably off in search of her stolen child. Any connection between these events, however, remains purely speculatory.

My loneliness ineffable, my pain beyond compare
Yet I am not afforded time to wallow in despair
For a king must not avert his eyes from what lies ahead
He must continue walking own the path he's born to tread

According to the lore exposition in Final Fantasy XV: Episode Ardyn, a legend states the storm god Ramuh sealed himself away within Fociaugh Hollow in Duscae.

In an unknown time, a king led an expedition to fell a powerful daemon, but his men were killed by "the burning giant". The spared king suffered immensely for this loss, but needed to uphold his duty as ruler and not succumb to despair. He sealed the daemon beneath the grotto and engraved these thoughts on a monolith for the True King to one day discover in the sealed dungeon.

The main cavern is inhabited by a talking daemon looking for its baby (implied to be a daemonified woman who had lost her child). The cave was thus sealed by the Oracle Sylva Via Fleuret, Lunafreya Nox Fleuret's mother.

After Lunafreya roused Ramuh from slumber to forge a covenant with Prince Noctis, the Astral opened the way inside to test the worthiness of the Chosen King. While Noctis and his friends explore the cave, the talking daemon tries to kidnap Prompto thinking he is her lost child. After the crew rescues Prompto and defeats the daemon, Noctis finds the last runestone and passes the trial of Ramuh. Forging the covenant, he is allowing to call upon the power of the Astral.

Amid the northern part of the chocobo race track in Duscae there are cylindrical buildings with yellow roofs. The map is under the stairs in front of the taller building. It marks a spot near Fociaugh Hollow entrance on the Malacchi Hills. The treasure is just south of the quest marker behind a square pillar.

In Chapter 15, the player can do the Menace Beneath Lucis sidequests after completing the following optional dungeons: Costlemark Tower, Crestholm Channels, Balouve Mines and Daurell Caverns. At Meldacio Hunter HQ Ezma Auburnbrie will provide the Sealbreaker's Key to open the sealed doors, including the one in Fociaugh Hollow. The recommended level for this dungeon is 65. The Windows and Royal Editions add monoliths to the dungeons, which the player can read to fill out their Datalog and get further lore information.

Fociaugh's sealed door is at the end of the dungeon, through a crawlspace on the upper-right corner of the area before Ramuh's runestone. The player must descend through a series of floors with the goal to defeat the boss at the bottom. This menace dungeon has 20 floors each consisting of one item and a set of monsters the player must defeat to proceed to the next floor. There is a haven along the journey, so the player can replenish health and cook.

The enemies in this menace dungeon are mostly samurai-type enemies that can inflict Instant Death. Wearing Ribbon, Safety Bit, the Assassin's Creed attires/Magitek Exosuit or eating food with Death-Defying is recommended. Since all enemies are daemons, using Light-elemental weapons (e.g. Dominator, Orichalcum etc.) and spamming Holy will help. The menace in this dungeon is a chandravarma, a more powerful version of a red giant.

Some notable treasures that can be acquired in this menace dungeon are the following: the weapons Enhancer (boss floor) and Organyx (10th floor), The Grand Chamberlain (6th floor—right dead end), which is an exclusive accessory for Ignis, and the accessories Centurion Bangle (12th floor) and Lavender Oil (14th floor—left dead end).

HexaDrive accompanied Square Enix on a trip to Chiba Prefecture to scout some caves. These caves later become the basis of the Fociaugh Cavern.[1] 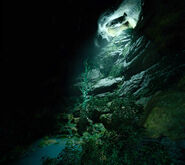 Noctis in a crevasse.

Map of Duscae from Famitsu with the cave map in the corner.