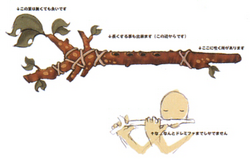 Flutes (笛, Fue?) are a recurring weapon type in the Final Fantasy series. They are wielded by a variety of job classes.

Though not an equippable weapon type, the Wind Flute is a battle item that when used, calls forth a whirlwind to do damage.

Eiko, a White Mage, can equip flutes as her weapon. She uses them as blunt physical weapons. She plays them when casting magic and in victory poses, but this is merely cosmetic.

Flutes are just one of many Instruments used by Animists and Beastmasters.

Flutes fall under the instruments category and can be equipped by the Beastmaster, Animist, and Bard jobs.

Deuce wields a flute as her weapon of choice. She attacks enemies by simply playing her flute and using her melodies to produce sound projectiles to attack them, rather than striking them directly with her weapon.

Some flutes appear and are part of instruments.