Flowering Cactoid is a Mark in Final Fantasy XII. The hunt can be undertaken as soon as the player has vanquished Thextera.

Flower Cactoid has been petitioned by a man named Dantro in the Dalmasca Estersand outpost. The Mark itself can be found in the Yardang Labyrinth area. It is dangerous at low levels and if attacked alone since it has the 1000 Needles Technick at its disposal.

It is also fought in the Zodiac versions' Trial Mode at Stage 3 along with two Cactoids and four Cactites. The player can steal swords from it here: Longsword (common), Mythril Blade (uncommon) and Karkata (rare); especially the latter is an easy way to make the party very strong early on.

How is it that such a beautiful Blossom might bloom atop such an ungainly Cactoid? Verily, its Beauty is more than in its Appearance, for the Blossom is valued as an Ingredient in Salves, and further prized by Collectors for the rarity of its Flowering. Amongst the Cactoids, the red Bloom is the mark of a Leader, and the Focus of much Respect and Adoration. However, to the villagers in the Dalmasca Estersand, it is merely a Mark.

The Flowering Cactoid can run away and is difficult at low levels. Its physical attack can inflict Blind, and it will use 1000 Needles once when its HP is below 20%. Magick, such as Fire, works well. If the player does not chase after it when it runs off, it will use Potions and constantly heal itself. This battle becomes much easier once Penelo joins the party.

Another tactic is to wait until the party escapes the Barheim Passage. Due to the mark's high Evasion, Balthier's starting gun could prove invaluable, as guns ignore Evasion. With Basch as a guest member, it is easier to take down the mark.

The player will also receive a Cactus Flower after the battle, which can be given to Dantro's wife as part of the Patient in the Desert sidequest. 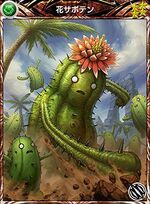 Retrieved from "https://finalfantasy.fandom.com/wiki/Flowering_Cactoid?oldid=3263360"
Community content is available under CC-BY-SA unless otherwise noted.