The Floating Continent is a location in Final Fantasy VI. It was originally the eastern part of the southern continent where the Cave to the Sealed Gate was located, and was levitated by the power of the Warring Triad.

After Emperor Gestahl and Kefka invaded the Esper World, the island the Cave to the Sealed Gate was located on was raised as the Floating Continent. It came to rest over Albrook as Gestahl made plans to use the Warring Triad's power to reign over the world.

Using the Blackjack, the Returners fly to the Floating Continent and engage the Imperial Air Force in a battle above the island, during which Ultros and Typhon also attack. The party defeats them and drops onto the Floating Continent. They quickly find Shadow, who had been working for the Empire but they had attempted to kill him once they had no further use for him, and he agrees to come with the party.

The group move to the summit to stop Gestahl, battling the legendary Ultima Weapon on the way. Shadow abandons the party, claiming he is still employed by the Empire.

At the summit, Celes confronts Gestahl and Kefka, and Gestahl uses the Triad's power to paralyze the others. Kefka hands Celes a sword, and Gestahl offers her the chance to rule the world with him and Kefka if she kills her friends to prove her loyalty. Celes refuses and stabs Kefka instead.

Driven into a rage, Kefka calls on the Warring Triad to awaken and give him their power. Gestahl tries to reason with him, but Kefka refuses to back down. Gestahl attempts to kill Kefka, but the magic field of the proximity of the Triad absorbs his attacks. Kefka calls on the Triad to strike Gestahl down, and bolts of lightning rain down, one eventually striking Gestahl and mortally wounding him. Kefka kicks Gestahl off the Floating Continent to his doom, and then knocks Celes aside.

Kefka begins to move the Triad statues and Shadow turns to stop him. The magc binding the party wears off, but a burst of magical energy from the Triad knock them away. Shadow urges them to flee as the Floating Continent begins to break apart, and the party runs to the tip of the continent where the Blackjack is below. Depending on the player's choice, they wait for Shadow to escape with them or escape without him, leaving him to perish.

Kefka's actions at the pinnacle of the Floating Continent change the world forever. With the Warring Triad moved out of their alignment, their magic goes wild and causes mass chaos and destruction across the world. The continents and oceans shift formation, many people are killed, and magic mutates and transforms the animals. The result is the World of Ruin, a half-dead husk of the planet that struggles to survive. The fate of the Floating Continent beyond its destruction is unknown.

The Floating Continent is roughly triangle-shaped like the island it was formed from, with its pinnacle with the Warring Triad in the approximate location the Cave to the Sealed Gate would be. The continent is full of unstable terrain that collapses when the party nears, sometimes directly or sometimes causing another part of the island to collapse. The continent is also full of teleporter-like holes in dirt mounds that move the party to another part of the continent. Judging from one of these holes that opens into a small cavern, the teleportation of these holes seems to be the party being moved through the ground by some sort of unknown, presumably magical force.

Treasures on the Floating Continent are not found in chests, but in blue orbs.

While escaping the continent there is an orb with an Elixir. It cannot be approached directly, or the ground in front of it will fall away and it becomes inaccessible. Instead, go down, right and up to approach it from the other direction, and it can be obtained safely.

This quest can be started by selecting the option for heading to the Floating Continent from the airship lift-off menu after witnessing the rising of the Floating Continent. The Blackjack prepares to fly to the continent when the Imperial Air Force intercepts them. Numerous battles occur against Imperial enemies, variably one or two Sky Armors and a Spitfire. After the first encounter the party is able to move around the airship deck freely, though this serves no purpose, and the menu can be opened.

After arriving on the Floating Continent, speak to Shadow to recruit him (the player cannot ignore him, the first collapsable passage will not open without him in the party). Follow the linear path left, down, and up, the ground collapsing at two apparent dead ends. The blue orb here contains a Murasame, then further right is an orb containing a Gigantos that drops a Sasuke. Climb the dirt mound and drop down the hole to warp.

Go down and there will be a conspicuous stone in the ground, step on it to extend the ground further. Go to the right, down the first set of steps but ignoring the second set, and enter the dirt mound to warp to a small area with two more dirt mounds. The right leads to a dead end, take the left mound and step on the conspicuous stone nearby to lower a large part of the ground below. That area can be returned to by simply backtracking, or going north to a conspicuous stone that lowers the ground and connects back to the previous area.

Go right over the large section of ground that was lowered, the path is linear to a conspicuous stone, a blue orb containing a Beret, and a small spot of ground in the south that leads to a cavern with a save point. Step on the conspicuous rock to make a dirt mound appear, drop down it to warp. The Blackjack is flying below if the player wishes to leave the Floating Continent; if they do, Shadow will not accompany them. To the left the pinnacle of the Floating Continent is guarded by the Ultima Weapon.

When Ultima Weapon is defeated, beyond it is the point of no return - ascending the steps to the Warring Triad advances the story to the point of the World of Ruin. If the player has anything left to do in the World of Balance, such as getting bestiary entries, treasures from other locations, etc., this is their last chance to do so. The party can still background after defeating Ultima Weapon and return to the Blackjack.

The only enemies that appear are Naudes, they can be KO'd quickly with Fira or Thundara spells, or Rasp to deplete their 195 MP, as they are KO'd when out of MP. Near the escape point is a blue orb, ignore it, the ground will collapse if the party approaches it directly; go down, right, and up to reach it, it contains an Elixir. The shining spark is a miniboss, Nelapa. An easy way to KO it is to summon Ramuh and Shiva, otherwise use a Thunder Rod or Ice Rod as an item to pierce its Reflect and deal heavy damage.

When the party reaches the edge of the Floating Continent the Blackjack will fly in and the party given the option to jump. If they choose to, Shadow will be left behind and perish, and be lost as a party member. To wait for Shadow, simply choose the dialogue option and then stand in place and wait. As long as the player reached this spot with at least 00:05 left on the timer, Shadow will appear at the 00:05 mark; if the player had exactly 00:05 on the timer, Shadow will appear immediately when the dialogue box is closed, as long as time has not completely run out.

The Floating Continent appears as the second map in Act 2, Ch. 5: Will of the Hunters. Like the original conflict in Final Fantasy VI, it is where the party confronts Kefka after he harnesses the power of Dark Manikins to create a new Blackened Will.

This section about a location in Dissidia Final Fantasy Opera Omnia is empty or needs to be expanded. You can help the Final Fantasy Wiki by expanding it.

The Floating Continent is the setting for two regular dungeons and is also featured in the Challenge Events Legendary Plunder, A Fateful Coin Toss, Touched by Magic, and Assassin in Black.

The party now makes for the center of the Floating Continent in order to keep Gestahl and Kefka from claiming the statues of the Warring Triad, said to contain the power to destroy the world.

With the seal broken, the power of the Warring Triad is unleashed, and the party is forced to flee the crumbling Floating Continent. While Shadow deals with Kefka, the party hurries to the airship. 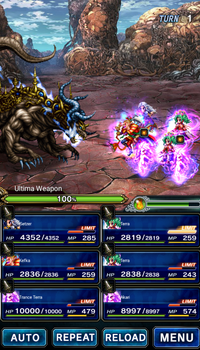 A glitch can occur when Shadow leaves the party due to the fight with the Ultima Weapon. If the player backtracks to the airship and leaves the Floating Continent after defeating the Ultima Weapon, when they return to the Floating Continent Shadow will not be present to join the party. Also, if Shadow is inflicted with a permanent status effect(s) like Poison, Invisible, etc.) when he leaves the party, he will still have that status when the player faces him in the Dragon's Neck Coliseum.

The party members are unequipped at the end of the Floating Continent and due to a bug, Cosmog's initial equipment (Boomerang and Buckler) are also unequipped and added to the inventory. This happens because Gogo hasn't yet replaced him and the game script will still unequip also the 13th and 14th slots of the roster. This means that the Three Scenarios Mog is also unequipped here, but he doesn't have any equipment.

The developers did not initially intend to create a "world of ruin". Rather, the plan was for the party to save the world and defeat Kefka just as the world was about to be destroyed. However, because the game was coming along more smoothly than expected, the developers could free up time to implement another version of the world after its "end".[1] This would have made the Floating Continent the actual final dungeon.

The point where the party can return to the Blackjack (iOS/Android/PC). 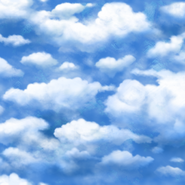 Battle background in the sky (iOS/Android/PC).

Battle background on the island (iOS/Android/PC).

The party at the Floating Continent (GBA).

The Floating Continent as it rises (GBA).

Battle background in the sky (GBA).

Battle background on the island (GBA). 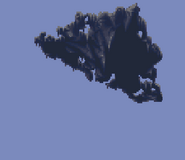 [view · edit · purge]A floating island in fiction is a landmass that floats in a body of water, or in the sky, when it could be considered a flying island, such as the flying continent of Laputa in Castle in the Sky. They can be free-floating, may be directed by the whim of their inhabitants, or others may be permanently anchored.