Float (レビテト, Rebiteto?, lit. Levitate) is a recurring status effect in the series. Floating units are immune to Earth-based attacks and damage floors in the early games in the series, but can become weak to Wind attacks. Float is usually bestowed by the spell of the same name.

Characters with Float are unhurt by damage floors. The status wears off when the player changes areas and must be recast in the new area, or after battle on the world map. Floating units avoid all damage from Quake spells.

It is exceptionally useful when the party visits the Feymarch and the Sylph Cave. In the 3D versions, having Float cast on characters a second time removes the status.

The Float status returns as a status effect, and it functions the same way as its predecessor.

Float functions the same as in the previous games.

Float protects the party from hazards on the map and Earth damage. It is acquired from the Time Mage's Float spell. The Mix item Levisalve (Levitate in the PS version) casts Float on the entire party, and can be mixed from a Phoenix Down and Holy Water. The Blue Magic spell Mighty Guard also casts Float.

Float grants immunity to ground-based attacks and magic. When Minotaur and Sacred are afflicted with Float, their passive HP regeneration is disabled. Float lasts for around 11.73 seconds.

Float levitates the target and making them immune to Earth damage. It is applied via White Magic spell Float. A constant Float effect can be caused by Auto-Float support ability. The abilities that miss Floating targets are Earthquake and Earth Shake.

The character floats above ground, safe from traps. The effect is temporary.

Float allows the party to avoid traps, as characters will float right over them. Additionally, Float causes Hashmal's Quakeja and Roxxor to always miss, and makes moving on the field silent as the characters will not have audible foot steps. Winged Boots grant Auto-Float to its user, and the item Float Mote also causes the Float status. The status is also bestowed by the Float spell, which is a Time Magick.

Float is a Time Magic spell learned from Time Mages, it costs 8 MP. It has a speed of 50 and needs 200 JP to learn. The accessories Winged Boots and Cherche both bestow Float, and the movement ability Levitate is similar to Auto-Float.

Floating units are suspended 1H above where they are standing and Earth-elemental attacks will not affect them. Floating characters can move over rugged terrain such as lava and water without penalty and are unaffected by other terrain-based penalties, such as the inability to move in water of depth 2h or greater (a character with Float will float 1h above the water level). Characters with the Float movement ability (but not those who received the status from the boots, the Cherche, or from the Time Magick) can stop over lava.

The Float status protects against Earth and Void attacks. The status can only be granted by specific Wind damaging mantras. If the player wants the Float status on their party members, they have to cast a damaging Wind mantra on them. 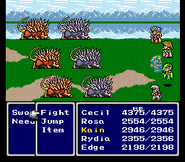 The Japanese name is levitate. [view · edit · purge]Levitation (from Latin levitas "lightness") is the process by which an object is held aloft, without mechanical support, in a stable position. Levitation is accomplished by providing an upward force that counteracts the pull of gravity (in relation to gravity on earth), plus a smaller stabilizing force that pushes the object toward a home position whenever it is a small distance away from that home position.