Cid Pollendina: Oh, shut up and help me remodel the Flee page!
Please expand this article into a full one. The following tasks need to be completed:

Flee (とんずら, Tonzura? or 逃亡, Tōbō?), also known as Escape and Run Away, is a command ability in some Final Fantasy games that instructs either the entire party to run from a random encounter, or a particular party member to run from that fight. It is usually associated with the Thief class. In some games, using this command will cause the party to lose some gil while running. Flee generally has a 100% chance of working, excluding fights from which the player cannot run from normally, such as bosses.

Flee (also called Escape) is an ability of the Thief job. It causes the party to flee as soon as the Thief takes a turn. It has a 100% success rate in the Famicom version, but can still fail in the 3D remakes.

Flee (also called Escape) is a Level Two command ability for the Thief class, and needs 20 AP to learn.

The Flee ability used by various enemies listed above is different from the one the player has. If Gau could use this ability through his Rage command, he would be able to flee from any battle, including boss battles. If Gau ran away from a boss through this ability, and the other party members were all defeated, the game would treat that boss battle as a victory, and that boss battle would be cleared although no items and Magic AP would be awarded to the player through this method. Gau cannot use it in a Rage in a normal playthrough, however.

Escape is an ability used by Bandit, Vice, and Prowler. After using one of the abilities Steal, Grind, Mug, or Hold-up, the enemy will flee the battle with the player's items or gil. The Chocobo also has an ability of the same name that it uses when it flees the battle.

Report is another ability that makes the unit escape. The Turks, Reno, Rude, and Elena use this at the end of all their battles, and are therefore never technically defeated. The Cactuar uses the ability to escape battle before the player defeats it. The Magic Pot will either use Report or steal an item with Gimme if the player does not relinquish Elixirs. The Ultimate Weapon uses Report in all its fights but its last fight where it is defeated.

The player can also leave battles with the abilities from the Exit Materia, but this is not the same as the recurring Flee ability.

Fleeing is achieved by running away from the battle. The text "Fleeing" appears in the upper center part of the screen as a confirmation that the party is actually escaping. Once the party has fled, the enemies reset to their status before the battle had started. This gives time for the player to recuperate and edit their party.

For some battles such as in Chadley's missions within the Shinra Combat Simulator, the player can leave the battle at any given time.

Flee is also an enemy ability used by the Wrath Hound in the Sector 7 Slums. It will flee the battle and move to another location.

Flee is one of Zidane's Skills that has the party immediately escape the battle while losing gil equal to 10% of the gil held by the opponents. The support ability, Flee-Gil, causes the party to gain gil when escaping with

but it has no effect on Zidane's Flee ability. Flee can be learned for 40 AP from the Dagger, Mage Masher, Zorlin Shape, Ultima Weapon, and Germinas Boots.

Flee is a Special ability located in Tidus's section of the Sphere Grid that immediately lets the entire party escape any normal random encounter without fail. If Tidus uses this command, he will frequently taunt the enemies while the party escapes.

Aid the party's escape from battle.

Flee is an ability learned by the Thief dressphere. It requires 10 AP to learn, and no MP to use. Run Away is an ability used by the Chocobo, which allows it to escape from battle.

Flee is a Thief job ability available at level 25 and can be used once every 5 minutes. Once activated, it will drastically increase the rate of speed a character can run. The player will increase in speed to about the same rate a chocobo can run, but only for about 30 seconds. The run speed of Flee is just slightly faster than Chocobo Mazurka.

on the controller disables all gambits and the party members follow the leader while ignoring any attacking enemies unless they are berserked or confused. Party members will sheathe their weapons while fleeing, which prevents them from blocking attacks, but they will not suffer the movement speed penalty from having weapons drawn, causing them to move at roughly 5/6 the normal speed.

To make fleeing easier, one can set the Battle Speed to slow from the config to slow the speed enemies execute attacks. Fleeing often prompts enemies to pursue the player party, and thus using

in the vicinity of fleeing enemies can make the enemy stop running away, and instead start pursuing the party.

Flee is a ability exclusive to Vaan's job, the Sky Pirate. It increases Vaan's mobility, allowing him to move farther and jump higher.

The Wayfarer has two job abilities that let the party run from non-boss battles. Runaway is known from the start, costs 1 AP, and ends the fight if successful. Escape is learned from the first upgrade to the crown, costs 2 AP, and always succeeds.

Flee is the level 3 ability for the Thief class, which allows the party to escape from fleeable battles. It costs no MP to use and requires one slot to equip and utilize. Some monsters may also use Flee (とうそう, tousou?, lit. escape), which removes them from battle and prevents XP, gil, or items from being awarded for them. Flee can also be used by a jobless Nacht.

Escape comes in three levels of power. Escape activates during Field Music Sequence (FMS) when the player receives Bad or worse on a Trigger, and has a chance of avoiding damage, activating up to three times per stage. The ability has a chance to activate based on the level of the ability—25% at Lv1, 55% at Lv2, and 85% at Lv3. Cid, Bartz, Faris, Zidane and Yuna all learn all three levels of Escape.

Escape (Lv1) is a reactive ability that costs 2 CP to equip. It is activated in Field Music Sequences (FMS) when the player receives a BAD or worse on a Trigger. It allows the player to escape damage with 25% success up to 3 times. It is learned by Cid (level 5), Faris (level 5), Edgar (default), Zidane (default), Lilisette (default), Vaan (level 5), and Vanille (level 10).

Escape (Lv3) is a reactive ability that costs 4 CP to equip. It is activated in FMS when the player receives a BAD or worse on a Trigger. It allows the player to escape damage with 85% success up to 3 times. It is learned by Cid (level 80), Yuffie (level 90), Zidane (level 35), and Balthier (level 45).

Escape is an active ability that costs 4 MP and allows the user to flee from battle, ending it prematurely. When Escape used in an exploration map, the party returns to the map and may continue exploring; when it used during a dungeon, any item, experience or gil obtained during the session will be lost—as will be any items consumed or the energy spent to enter the dungeon, since they will not be replenished. In some cases, using Escape can allow skipping mob monsters right to the boss battle. The Smoke Bomb items fulfills the same function and effects. It can be learned by Eldin (level 12, 1★), Kefka (level 6, 3★), Locke (level 7, 4★), Thief (level 12, 4★) and Zidane (level 15, 4★). Escape also is Paul's Trust Master reward.

The player can otherwise click the Menu option and select "Give Up", both in exploration maps and dungeons (though it will end the session outright and will mean the loss of energy).

Flee is a passive ability that guarantees escape as long as an enemy can be fled from. It can be used by Black Chocochick, Cactrot, Cactuar, and Cactuar Johnny.

Flee is a Miscellany ability learned by Freelancers at job level 11. It allows party members to always succeed in escaping from battles, though it will not work in certain battles or areas. 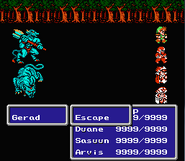