Inflicts darkness on all enemies.

Flash (フラッシュ, Furasshu?) is a recurring spell and ability that tends to adversely affect Accuracy.

Flash is an enemy ability that can be used by Deepeyes. It attempts to inflict Blind on the whole party. It is Darkness-elemental and has a spell accuracy of 24.

Flash is a Ninjutsu spell, which can be used by Gekkou and Zangetsu. It inflicts Blind to all enemies, and costs 7 MP to use. It is learned at level 15 for Gekkou and level 11 for Zangetsu.

Flash is a Blue Magic spell that inflicts the darkness status effect on all enemies for 7 MP. Blue Mages can learn Flash from Headstone, Crew Dust, Ramuh, Neon, Gilgamesh, Necrophobe, Azulmagia, Orukat, Parthenope, and Stone Mask. In order to learn it from the Headstone enemy, the player must give it MP first for it to use the spell.

Flash can be utilized by catching and releasing a Headstone, Ushabti, or Crew Dust.

Flash is used by Genesis Rhapsodos in the final boss fight. It fires several needles of yellow electricity.

Flash is a White Magic spell available to Paladins, White Mages, and Rune Fencers that inflicts a special status similar to Blindness that lasts up to twelve seconds if completely unresisted (the status is also known as Flash). Flash generates a large amount of enmity for the caster, so it is a useful tool for a Paladin to gain the enemy's attention.

Conversely, White Mages often avoid casting Flash to keep their Enmity levels as low as possible. Flash is based on the Divine Magic skill, unlike Blind (which is based on Enfeebling Magic skill).

Normal monsters have the ability to resist Flash, although this is extremely rare. It stacks with Blind and does not overwrite itself. If the target is already flashed it will fail to take effect. Automatons with a Flashbulb equipped can use an ability with the same effect, which cannot be reflected or absorbed by shadows. The effect cannot be removed by Blindna, but can be removed by Erase, Esuna, or Healing Waltz.

Flash is a Gladiator spell that raises enmity. It costs MP to cast; the actual cost varies; depending on the level and class of the user. In version 1.0, Flash is a single-target spell that raises the target's enmity. The trait Enhanced Flash allows the spell to inflict Blind. The trait Enhanced Flash II can also be learned, changing Flash to an area-of-effect spell.

Flash is an enemy ability used by Ghost and Wraith, which inflicts Blind to all surrounding units.

Flash is an ability that has 10 uses and inflicts Blind on a group of enemies. This ability is used by Evil Eye and Byak-Ko2.

Flash is a status inflicting ability that has 15 uses, it also increases a Robot's HP by 9. It inflicts Blnd to one group of enemies. This ability can be used by Byak-Ko, Evil Eye, and Gazer.

Flash inflict Dark to one enemy. Maitie, Spectrat, Guard, Keeper, and Monitor can use this ability.

X-Flash can inflict Fatal to one enemy. Searcher and Alert can use this attack.

Flash is a Dark Magic spell and costs 2 AP to cast. The spell inflicts the Blind status on a single foe. Flash can be given to any character by having a Flash Tome in the character's inventory. The spell can only be purchased in Guera and Urbeth for 500 gil.

Flash is an enemy ability that inflicts Blind on the party. It is used by Lux Lantern.

Inflicts Blind to all enemies, decreasing their ACC.

Flash is a level 5 ability of the Ninja class, requiring 115 AP to learn. At the cost of 23 MP, the user will inflict the Blind status on all enemies.

Flash is an active ability that inflicts Blindness on all targets for 3 AP. It can be used by Astraea, Goblin Guard, Holy Dragon, Magna Roader (Yellow), and Princess Goblin★.

It is also an enemy ability used by Buer.

Flash is an ability used by Sephiroth. This technique can be done by being in the Draw Sword Stance, and pressing the Guard + Up buttons. 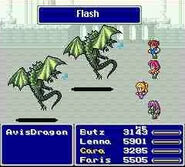 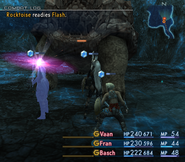 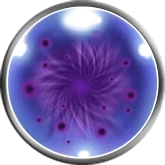