Flan Princess (プリンプリンセス, Purinpurinsesu?, lit. Pudding Princess), also known as Princess Flan, PinkPuff, and Pudding Princess, is a recurring enemy in the series ever since Final Fantasy IV. They are generally the most powerful Flan in the games they appear in.

Flan Princess is an enemy fought exclusively in the Game Boy Advance and some later releases at Raqia. It is not the most powerful Flan despite being in the bonus dungeon, falling short to the Black Flan. Unlike other Flan, it does not absorb the Poison element, instead being weak to it. It will absorb all other elements.

Its original appearance in the series, Flan Princess is a rare enemy fought at Lunar Subterrane, specifically in a room on floor B5 in a room containing a chest with a Red Fang, and additionally at the Lunar Ruins in the GBA and later releases. It is notorious for being an extremely rare enemy, having a 1/64 chance of appearing, and carrying one of the most valuable items that is drops at a 1/64 chance: the Pink Tail. In the 3D versions they can also drop the Rainbow Pudding.

Flan Princess will always attack in a group of five in the Lunar Subterrane, and in a group of of eight in the Lunar Ruins. They constantly inflict Berserk in addition to attacking with a very powerful physical attack and inflicting Confuse with Entice. Unlike other Flan, they take normal damage from all elements and do not have super high Defense, and will take quadruple damage from Drain weapons.

Flan Princess returns as an enemy fought in the Subterrane, fighting identically to their previous incarnation with the exception of Samba de Flan now affecting only one party member at a time with a high chance of missing and will not use it all at once at the beginning of battle.

Flan Princess is a boss fought in the Game Boy Advance and later releases at Dragons' Den, found in a monster-in-a-box. It is fought in a group of five, and has access to the abilities Imp Song, Lullaby, Mega Berserk, and Mystery Waltz. It counters all attacks with Entice. Flan Princess is weak to Fire-elemental spells, but is immune to all other elements except Ice and Lightning. Upon defeat, they relinquish Shadow's ultimate weapon, the Oborozuki. A spoil of victory is 55,555 gil: this may be a joke by the developers, as the number 5 is pronounced "Ha" in the Thai language, and "555" is commonly used in Thai social media to mean "laughter". 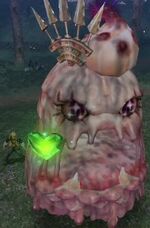 This section about an enemy in Final Fantasy All the Bravest is empty or needs to be expanded. You can help the Final Fantasy Wiki by expanding it.

A "princess" simply because it's so hard to get an audience. With luck, she'll drop the REAL prize...

The Flan Princess is a Amorphid-class Flan monster. It can only be found by summoning it at Mount Chaminil using the Crystal Surge ability, triggered after defeating a couple of Flans in the area. It may drop a Pink Tail material.

The Flan Princess is a M-Sized Mirage that appears as a hidden boss, alongside the Malboro Menace in the Windswept Mire. After defeating her, the player obtains a Flan Princess memento.

A women at the desert Caravan has a side quest where she tasks the player to show her a Flan Princess. 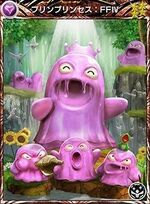 In the Final Fantasy XIII-2 Brain Blast quiz, it is said that legendary flan with a pink tail is called "Flan Princess". 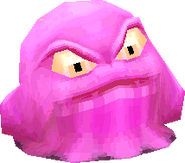 [view · edit · purge]Pudding is a kind of food that can be either a dessert or a savory dish. The word pudding is believed to come from the French boudin, originally from the Latin botellus, meaning "small sausage", referring to encased meats used in medieval European puddings.

[view · edit · purge]Puff pastry, also known as pâte feuilletée, is a flaky light pastry made from a laminated dough composed of dough (détrempe) and butter or other solid fat (beurrage). The butter is put inside the dough (or vice versa), making a paton which is repeatedly folded and rolled out before baking.