The Flan Master, also called Master Flan, is a boss in Final Fantasy IV Advance and The Complete Collection. It appears in the Cave of Trials and guards Palom's ultimate weapon, Triton's Dagger.

Flan Master attacks with two Black Flans and two White Mousse, which it will reform when they all die. It casts Reflect on itself, then bounces Thundaga, Flare, and Drain spells off itself, in that order.

It is best to use Palom's magic to kill off three of the Flan/Mousse, then have Cecil and the rest of the party use physical attacks. Porom should also be brought along, to heal the party and cast Twin Magic with Palom if needed. She can also cast Reflect on the party so Palom can bounce his magic back at the Flan Master; this method is quite dangerous, as it may hit the fourth Flan and revive all of them. 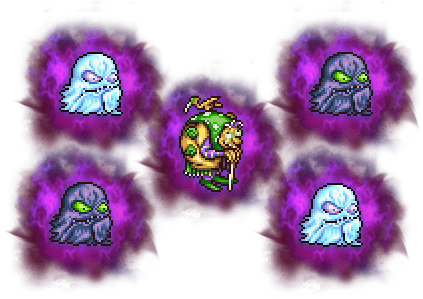 Retrieved from "https://finalfantasy.fandom.com/wiki/Flan_Master?oldid=3300467"
Community content is available under CC-BY-SA unless otherwise noted.