Highly resistant to physical damage, so magic is your best bet. What flavor is a turquoise flan, anyway? This thing looks like it's packed with artificial pigments and preservatives.

Flan is an enemy in World of Final Fantasy. 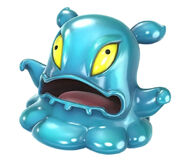