Flan is an enemy in Final Fantasy XV fought in Greyshire Glacial Grotto, Malmalam Thicket and Costlemark Tower, as well as the Squash the Squirmers hunt. It is a daemon based on the recurring flan enemy from the series.

The Sweet Jamming: Flan fishing lure is fashioned after this enemy.

Squidgy daemon that thrives in the dank dungeon air. Its survival as a species is predicated less on its defenses and more on its texture, which absorbs physical attacks well enough to make it not worth a frustrated predator's while.

A mushy mass that has gathered near the Longwythe Rest Area. Any flan bold enough to brave the open air is not to be trifled with.

Flan only use physical attacks. They are weak to light and resist damage from weapons; the weapons that do good damage are the royal arms. Flan move slow but their slap attack has a good range as they are stretchy. This attack will also stagger Noctis, sending him falling over if it connects. The flan's lunge attack can be blocked and parried. They can shoot projectiles from their mouths. They energize the tips of their "hands" with Darkness to deal damage that drains the party's max HP. They can melt into the ground and rematerialize somewhere else.

The player can use the royal arms and elemancy to best damage them. Character-swapping to Prompto lets the player also use his lumen grenade. Using blindside-strikes and parries can also be useful. 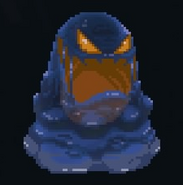 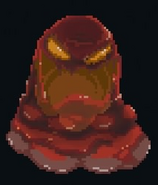 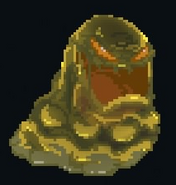