Detects by Sound
Detects Job Abilities
List of Flan Enemies
Flans are one of the few varieties of natural wildlife left on Mount Zhayolm. Although their bodies are pliable and gelatinous, flans also possess large, sharp eyes used in searching out prey, and a flexible mouth filled with fangs. Despite their outward appearance, flans are also known for being highly intelligent, and reports of flan using extraordinarily powerful magic are not uncommon. However, they are unskilled in suppressing their emotions, and a flan's mood tends to have an enormous effect on its actions. Flans live in groups that seem to be connected in some inexplicable manner, but not much is currently known due to the dangers of researching such formidable creatures.

Flan can take on a number of appearances, or "modes"—namely, a "spiky" mode and a "scrunched" mode. Unconfirmed reports indicate that the flan will take more magical damage and less physical damage when in spiky mode. 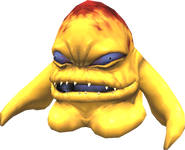