Flamestrike is a Ravager ability that deals fire-elemental physical attack against a target foe. It has an ATB cost of 1 and an Attack Power of 1.2. It can be learned by Lightning (Crystarium Stage 8), Sazh (Stage 1), and Fang (Stage 7).

Flamestrike is a Ravager ability that deals physical fire-attribute damage to a target. Its damage is based on user's Strength and has damage mod of 1.05.

Flamestrike deals fire-attribute physical damage. It has an ATB cost of 15, Multiplier of 0.40, Stagger Power of C, Stagger Time of E, and a Combo of 5.

Fang uses Flamestrike to opponents weak against fire when she is a guest party member.

Fire damage to one enemy

Flamestrike is an active special ability learned by Lightning (level 18 (5★)), and Fang*(Currently, a Japan-exclusive unit) (evel 12 (4★)). It costs 7 MP to execute and deals fire physical damage (1.4x) to one enemy, being a single-target (and slightly weaker) counterpart to the Heat Blitz ability. 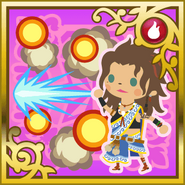 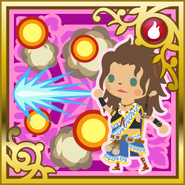 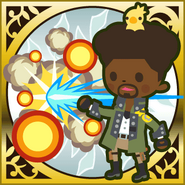 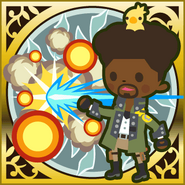