The Flamehound, also known as the FlameDog, or Fiery Hound, is an enemy from Final Fantasy IV.
See also: Flamehound

Flamehound is a dangerous enemy due to its high Attack power and potent Scorch ability, which damages all party members with a blast of fire. It is not recommended encountering near Agart immediately after getting the Enterprise. The Flamehound appears in the Tower of Zot as a monster-in-a-box enemy, but it can also attack solo or in pairs at the Tower of Babil. When confronting two of these beasts at a time, it is best to bring out strong magic such as Blizzaga or Shiva, or simply run before the party is overwhelmed by a double dose of Scorch.

Flamehound appears as an enemy. 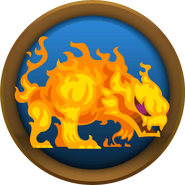 Retrieved from "https://finalfantasy.fandom.com/wiki/Flamehound_(Final_Fantasy_IV_2D)?oldid=3300321"
Community content is available under CC-BY-SA unless otherwise noted.