A sword from a faraway world. Its blade is imbued with the power of fire. It is said that in its home world, it could be found within a treasure coffer in the Tower of Zot, but that acquiring it necessitated defeating a monster wreathed in flames. It could also be purchased in a dwarven castle found deep underground.

Flame Sword (フレイムソード, Fureimu Soudo?) is a recurring sword in the series. It is similar to the Flametongue in that it is a Fire-elemental sword often found halfway through the game and usually around the same time as the Icebrand.

A sword that dances with flame.

The Flame Sword can be found in the Cavern of Ice and provides 26 Attack and 20 Accuracy. It has a critical rate of 20, and can be used by the Warrior, Knight, Ninja, Red Mage, and the Red Wizard.

It is meant to deal increased damage against Fire-weak, undead, and regenerative creatures, although this trait is bugged in the NES version and the special effects do not take effect.

A sword wreathed in flame.

The Flame Sword can be found in the Mysidian Tower's fire floors, or dropped from the Fire Gigas. Leon rejoins the party equipped with one. It provides 63 Attack, 60% Accuracy, and 2% Evasion.

Sword immersed in the power of fire.

Flame Sword (originally called Fire) is equippable by Cecil and Kain and can be bought in the Dwarven Castle for 14,000 gil. It can also be found in the Tower of Zot or dropped from Flame Knight, and provides 65 Attack and 40 Accuracy. This weapon is metallic.

In the 3D versions, it is capable of casting the Fire spell when used as an item. It has an attack power of 65 with an accuracy of 90 with the same properties as the 2D versions. it can be equipped by Cecil and Kain, and Golbez if hacked into the party.

Flame Sword is a sword that can only be equipped by Cecil and it can be bought in Damcyan Castle, Fabul Castle, and the Dwarven Shop on board the Falcon for 14,000 gil. The sword can also be dropped Flame Knights found in the Tower of Babil. It has an attack power of 65 and a accuracy of 40, the sword is also Fire-elemental.

The Flame Sword is a high ranked sword bought for 14,000 gil in Kaipo, or dropped from Flame Knight. It provides 65 Attack and 30% Accuracy.

Flame Sword is a sword that provides 16 damage, 218 delay, with an additional Fire damage effect. It deals 4.4 damage per second and accumulates 59 TP per hit. It can be equipped by level 18 Warrior, Red Mage, Thief, Paladin, Dark Knight, Bard, Ranger, Ninja, Dragoon, and Blue Mage. It can only obtainable through synthesis.

The Flame Sword a level 50 weapon exclusive to the Warrior of Light that increases Attack by 36, reduces all damage by 5%, and increases base Bravery by 20% at the start of a battle. It can be traded for 15,460 gil, a Rapier, Spirit Stone x3, and Protect Shard x2.

The Flame Sword is a level 30 exclusive weapon for the Warrior of Light, with its Attack upgraded to +40 while retaining its Defense bonus. It can be traded for 61,000 gil, a Rapier, a Scarletite, and Hero's Desire x5.

The Flame Sword is one of the Warrior of Light's unlockable weapons, alongside the Flame Shield. It can be obtained either by random chance when redeeming a Treasure token, or by purchasing them both from the Shop for 7,200 gil. Equipping it carries no advantages or disadvantages.

Flame Sword (FFIV) is a Sword obtained during the Final Fantasy IV event, Tower of Zot - Exploration. It provides 112 ATK, is Fire-elemental, and gives 30% Fire resistance. It required 1 Red Cube, 1100 Dark Obsidian, and 10,000 gil to craft. 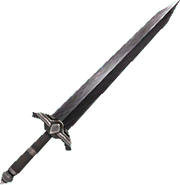 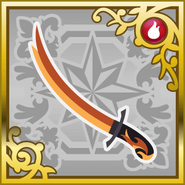 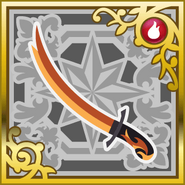 [view · edit · purge]A flaming sword is a sword glowing with flame by some supernatural power. Flaming swords have existed in legend and myth for thousands of years.

It is also called "Fire." [view · edit · purge]Fire is the rapid oxidation of a material in the exothermic chemical process of combustion, releasing heat, light, and various reaction products.