A weapon born in the heart of flames. Burns to a crisp all that it pierces.

Flame Lance (ほのおのやり or 炎の槍, Honō no Yari?), also known as Flame Spear and Wildfire Spear, is a recurring spear in the series. It is of the Fire-elemental nature, and usually shows up around the same time as the Ice Lance and Thunder Lance.

A lance wreathed in flames.

Flame Lance is a mid-ranked spear that provides 54 Attack, 62% Accuracy, and 2% Evasion. It can be bought for 15,000 gil at Mysidia and Machanon, or found at Cave of Mysidia and Mysidian Tower.

Spear immersed in the power of fire.

Flame Lance is a low-ranked spear that provides 66 Attack, 30 Accuracy, and casts Fira when used as an item during battle. It can be bought for 11,000 gil at Dwarven Castle or dropped from Flame Knight.

In the 3D versions, Flame Lance is near identical, but instead provides 80 Accuracy.

Flame Lance provides 66 Attack, 30 Accuracy, is Fire-elemental, and casts Fira when used as an item. It can be dropped from Flame Knight. It cannot be equipped by anyone.

Flame Lance provides 66 Attack, 30% Accuracy, +5 Strength, is Fire-elemental, and casts Fira when used as an item. It can be found in Edge's Challenge Dungeon on the last floor, or dropped from Flame Knight and Melt Golem. It can be equipped by Kain, Ceodore, Zangetsu, and Golbez.

Wildfire Spear is a mid-ranking weapon for Nine with an attack power of 42 that boosts his Fire Magic by +15 and has a 30% chance of inflicting Burn when hitting an enemy. It sells for 1,800 gil is a reward for the Wyverns in the Woods mission (S-Rank on Finis difficulty) and for completing a special order in Capturing the Imperial Capital - Combat Trial: Refrain from using magic for five minutes.

Flame Lance is a low-ranked spear that provides 43 Attack, +5 to Fire, +25 to Stun, and has one available slot for jewels. It can be equipped by all races.

The Flame Lance has an Attack of 4 and is Fire-elemental. It can be bought in Liberte (After Darkness) for 640 gil and found inside Ice Caverns.

Flame Lance is a level 1 spear that provides +17 Attack, -2 Defense, -159 HP, and Wall Rush BRV Damage +20%. It is bought from the Moogle Shop for 60 KP as one of the general items available in all normal Moogle Shops.

A lance endowed with the power of fire that when swung releases flames from its tip. Its enchanted blade was forged in the same manner as a mystical sword's, but it lacks the raw power of the weapons tempered by mages. Due to this, its flames do not burn brightly enough, driving most owners to search tirelessly for ways to enhance it. However, the flame lance still proves very effective against foes who are helpless against fire.

Flame Lance is a Spear obtained by crafting it using 960 gil, x8 Fire Crysts, x5 Fire Megacrysts, x3 Iron Ores, and x12 Mythril Ores, and by completing the quest Settling the Score. It provides 48 ATK and is Fire-elemental.

Fire Lance is a spear that can be equipped by Santiago. 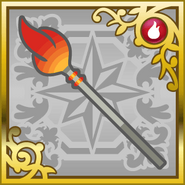 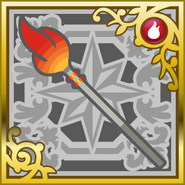 The fire lance or fire spear was one of the first gunpowder weapons in the world. The earliest fire lances were spear-like weapons combining a bamboo tube containing gunpowder and projectiles tied to a Chinese spear.