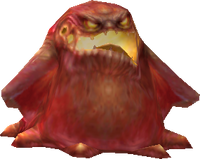 This monster's soft, jiggly body functions as a shock absorber, negating all physical damage. The flame flan attacks by unleashing a fiery shockwave or by chomping down on an enemy. The wise assailant would dodge the flame flan's charge and retaliate with a powerful ice-based attack in order to slay the slime.

The kingdom employs their own flame flans know as "crème brûlée," superpowered jellies trained to maneuver and assault with greater speed than their common counterparts. Scientists have also discovered an even larger breed of flame flan they have dubbed the "inferno."