Find a sphere and the fiends appear.

The Flame Dragon is a boss in Final Fantasy X-2, found in the back of a cave on Besaid Island in Chapter 1. It can also be encountered in Via Infinito.

"A dragon fiend that belches flames from its giant maw. It lives in the cave near Besaid. It's just as powerful as it looks, but its attacks are fairly monotonous."

Flame Breath
Nothing to learn

"A dragon of formidable size, with strength to match. It stores up its strength and then unleashes devastating attacks, so be prepared!"

The Flame Dragon is strong as it has a Flame Breath attack that can cause triple-digit damage. In Oversoul, it is even more dangerous, as it can gather strength for Bruiser Tail, a group phyiscal attack which hits for 37.5% of the party's max HP.

The player should have a Black Mage cast Ice spells every turn for heavy damage, while the other two can attack normally, or a Warrior could use its Ice Brand technique. This can also be done with a captured White Elemental, which can cast Blizzard or Blizzara.

Another strategy to use with the above strategy is to equip the party with the Heart of Flame Garment Grid (reward for completing the "Foggy Fiend Frenzy!" mission) to absorb its Fire-based attacks.

To enter the Aeon Cup in the Fiend Arena, the player must capture and raise the story levels of eight special creatures. These creatures will immediately be available to be released upon capture, however, what the player has to do is raise their story levels by three and then release them. This will change that particular creature into an aeon. The Flame Dragon is one of these eight creatures, capable of being changed into Ifrit. 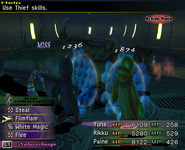