The head of this large mace is enveloped in flames.

Flame Bute (ファイアビュート or フレイムビュート, Faia Byūto or Fureimu Byūto?, lit. Fire Bute or Flame Bute), also known as FireLash, Fire Lash, Flame Whip, Fire Whip, Flame Mace, or Wildfire Whipblade, is a recurring weapon in the series. It is usually a high-level, Fire-elemental whip, though on one occasion it has been a mace. It is usually a favorite of Summoners and Beastmasters, and will sometimes cast Firaga when attacking with it, depending on the game.

Whip immersed in the power of fire.

The Fire Whip (also called Flame Bute and Flame Whip in the Easy Type version) is the third strongest whip for Rydia as of the Advance release. It is found in the Lunar Subterrane, has an Attack of 50, Accuracy of 15, is Fire-elemental, and inflicts Paralyze when attacking.

The Fire Whip was intended to be a weapon that was suppose cast a spell when used as an item during battle. It remains incomplete due to having no spell associated with it. The data within the code has it with a spell power of 4.

The Fire Whip is a weapon that provides 50 Attack, 15% Accuracy, +5 Strength, +5 Speed, +5 Stamina, -5 Intelligence, -5 Spirit, is Fire-elemental and has a 30% chance of inflicting Paralyze. It can be found in the Subterrane of the True Moon. It is a powerful whip and is only surpassed by a few, such as the Mystic Whip. It can be equipped by Rydia, Izayoi, and Harley.

Whip infused with the power of fire. Full power from back row.

The Fire Lash (also called Flame Bute) is the whip Sealed Weapon, and is the second strongest whip, next to Dragon's Whisker. It has an Attack of 82, is ranged, increases Strength and Agility by 2, and may cast Firaga after attacking with it.

Flame Mace (Flame Whip in the PS version) is the second weakest mace, and can be bought for 4,000 gil during Chapter 2. It has an Attack of 11, is Fire-elemental, and may cast Fira after attacking with it. It can only be used by Squire and Ninjas.

The Wildfire Whipblade is a whip for Seven. It increases her Strength by 38 and her Flame Magic by 15, and has a 30% chance of inflicting Burn on targets during attacks. It can be won as an S-rank reward for Combat Exercise 7-E on Impossible Mode, or by completing an S.O. during Mission 5-Crimson.

Flame has a whip icon before its name. The Flame is the second available flail, it can be bought for 6,300 GP in Ish. It has an attack power of 38 and deals Fire-elemental damage.

Some find the sting of this whip, found deep within Kuza, not altogether unpleasant.

Fire Lash grants +20 to Attack. It can be equipped by Beastmaster.

One of the Twelve Radiant Arms. A legendary whip engulfed in searing flames. Who made it is unknown, but one can tell that the whip is infused with overwhelming fire magic. It is said that those struck by this whip will feel the fire burning through their bodies straight to their bones, even if wearing heavy armor. Only those who have shown their might to The Secretive Dragon Sage of Compassion, Nunki, can hold this whip.

Flame Whip is a Whip obtained by defeating Nunki in the Chamber of Arms. It provides 98 ATK, 117 MAG, is Fire-elemental, and grants access to the spell Firaja. 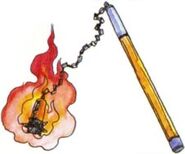 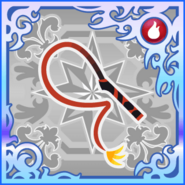 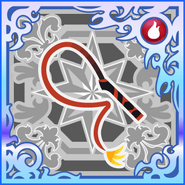 This gallery is incomplete and requires Final Fantasy V (iOS) added. You can help the Final Fantasy Wiki by uploading images.
Blunt weapons
Community content is available under CC-BY-SA unless otherwise noted.
Advertisement