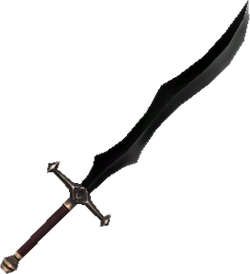 A thrusting sword with a blade shaped like a single tongue of flame.

Flamberge (フランベルジュ, Furanberuju?) is a recurring sword in the Final Fantasy series. It is often a low to mid-ranked weapon with mediocre Attack power and no special abilities.

Lightning from Final Fantasy XIII has a gunblade version of this weapon that has become one of her signature weapons.

The Flamberge is a level 69 greatsword designed exclusively for Paladins. Aside from a damage rating of 80, it also boosts MND +2 and Attack +5. It can only be manufactured by smiths.

Thrusting sword with a wavy blade.

Flamberge is a mid-ranked rapier, usable by Fencers, Red Mages, and Elementalists. It provides +35 Attack, +5 Defense, and +2 Speed, and teaches Shadowstick for 200 AP to Fencers, Sliprain for 200 AP to Elementalists, and Poison to Red Mages for 100 AP. It can be bought from Muscadet for 3,750 gil and any other town for 4500 gil.

Flamberge is a low-ranked rapier, used by Fencers, Red Mages, Elementalists, and Chocobo Knights. It provides 32 Attack, 5 Defense, and 2 Speed, and teaches Piercing Blow for to Fencers for 300 AP, White Flame to Elementalists 200 AP, and Blizzard to Red Mages 150 AP. It can be bought for 620 gil in the shop after being created in the Bazaar after using a Ice Stone, Sanative Needle, and Moonwood.

Flamberge is a weapon for Queen that provides 5 Attack Power. It can be bought from the Akademeia Armory for 1200 gil.

Flamberge is a level 22 greatsword that provides +19 Attack and Physical Damage +10%.

The Flamberge is a level 1 greatsword with +15 Attack, -2 Defense, and increases Physical Damage +3%.

A large sword with a wave-like blade that evokes the image of a raging inferno. Unlike the faussar, it is designed to cut deep into enemies' flesh, inflicting nigh-invisible but lethal wounds, and has thus become a popular weapon among knights seeking to avoid overt displays of gruesome violence.

[view · edit · purge]The term flamberge, meaning "flame blade", is an undulating blade that is found on both long blades and rapiers.