"A plant with feet. It jumps up and down to cause earthquakes. It has several abilities, including a particularly annoying one that causes MP damage."

"A plant fiend. Oversouling has given it the ability to use magic. Its favorite new trick is to cast Haste on itself and launch a frenzied attack."

Flailing Ochu is a tad more powerful than the Drowsy Ochu, and is only more dangerous than it when in Oversoul since it has access to Alchemist-Hater and White Mage-Hater. It is best to avoid using any White Mages or Alchemists and focus on hitting it with Fire-elemental attacks. Having Poison-resistant equipment will help avoid its dangerous Poison attacks.

A notable Flailing Ochu was created from the spirit of a man who committed many criminal acts in the name of gil. As fiends cannot buy from stores, Flailing Ochu is dismayed and realizes he saved his money for his girlfriend, Monica. He leaves Shinra to find her while learning nothing about money not buying happiness. 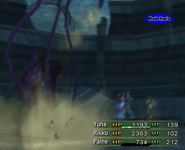 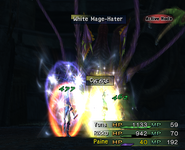 White Mage-Hater.
Add a photo to this gallery

Retrieved from "https://finalfantasy.fandom.com/wiki/Flailing_Ochu?oldid=3149889"
Community content is available under CC-BY-SA unless otherwise noted.